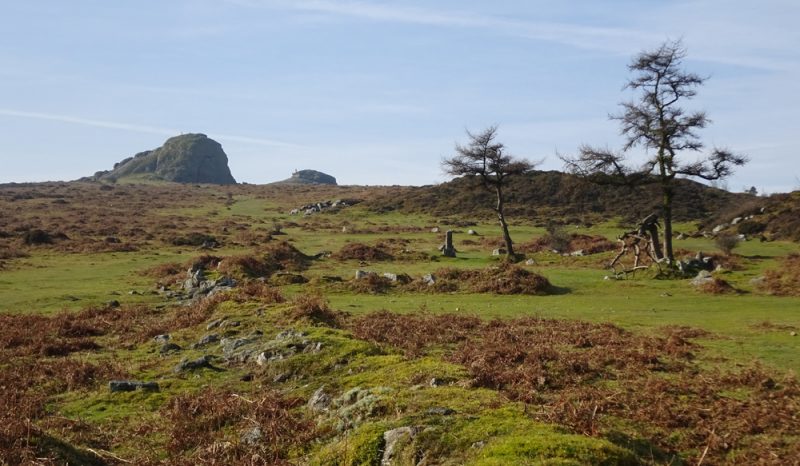 A morning on Haytor granite

On Saturday a group of interested people met at the Moorland Hotel at Haytor for the launch of Stuart Drabble’s new book Haytor Granite: A Celebration (mentioned In the News in the winter 2018 issue of Dartmoor Magazine). Stuart’s intensely researched book tells the story – in extraordinary detail – of the Haytor granite industry on Dartmoor, and the people who ran it, focusing on the early 19th century and the activities of the Templer family of Stover. George Templer was responsible for the construction of the Haytor Granite Railroad, which opened in 1820 (look out for celebrations marking the 200th anniversary next year). Stuart’s book comes highly recommended (we’ll be reviewing it in DM sometime in 2020), and is available at DNPA Visitor Centres, price £16.95.

On a beautiful sunny morning we were treated to a ‘tour’ of Haytor Quarry and the granite tramway in the company of archaeologist Dr Phil Newman. I’ve been to the quarry, and walked in the area, many times, but it’s always a treat to revisit such places with an expert in the field. We headed up towards the main quarry, pausing at an area of uneven ground, foundations of former buildings (possibly cottages). Phil impressed upon us that back in the mid 1800s this part of the moor would have been buzzing with life and industrial activity.

When standing by the quarry pond Phil told us that we were in the oldest quarry in the Haytor area (I believe there were five at one time), this one dating from the 1820s and the first to be worked on an industrial scale. The narrow access path runs above what was once the main quarry entrance – horses and carts would have passed along the gully below the present path. In the 1830s, however, that part was also quarried, and so a new entrance was cut on the north side of the original quarry (via which walkers exit today). The lie of the land was starting to make sense!

Phil also told us that the crane base seen in the image above is not original but dates from the 1920s when the quarry reopened briefly for granite for the war memorial by Exeter Cathedral was extracted (more in Stuart’s book). The odd iron ring (below) set around the edge of the pond would have been used for supporting stanchions to hold the crane in place.

… to the north side where Phil talked in detail about how the granite was extracted, and pointed to evidence in the nearby rockface (which, when it was pointed out, had obviously been worked). In the photo below you can see evidence of drill holes for the gunpowder used to blast the granite out (the line of vertical holes, and the narrow groove at which Phil is pointing). The third photo shows an example of feather and tare, a traditional method of ‘cutting’ granite; the bottom photo is evidence of an earlier method known as ‘wedge and groove’ (which can just be seen on the edge pointing towards the camera).

We headed out through the ‘new exit’ to look for traces of tramway. Again, I’ve walked along the tramway and its various branches many times, but I’d never noticed – just as we emerged into the open – partially covered granite setts indicating a junction.

It soon became clear that there was once a real network of tramways and junctions and sidings on this part of Haytor Down. Look closely too and you can spot the odd letter carved into the setts (masons’ marks?).

We headed back to the ‘old’ entrance to the 1820s quarry, where Phil produced some old prints of the quarry and associated buildings, many of which are included on the Tithe Map of 1840.

From there we made our way back to the Moorland Hotel (noticing a WW2 gun emplacement and slit trench en route!) for coffee and Stuart’s talk. A fascinating morning – many thanks to all involved.