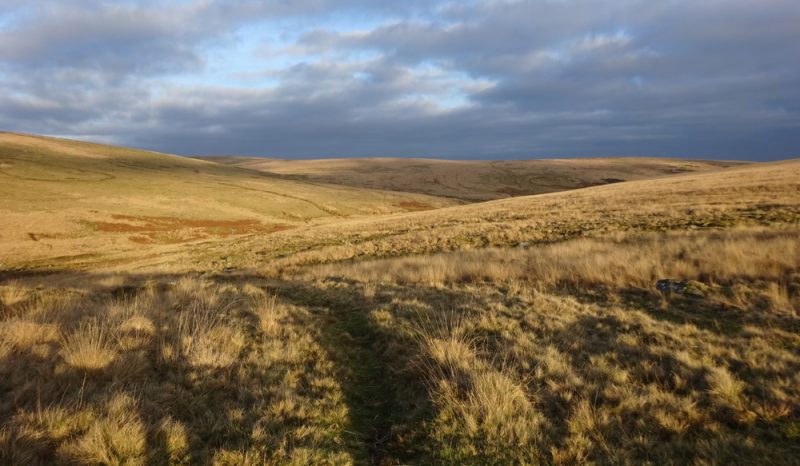 I had a real treat yesterday: a trip by DNPA Land Rover onto the South Moor to look at the site of a new marker stone destined for the route of the Two Moors Way at Crossways, near the point where the route leaves the trackbed of the Red Lake Railway. It’s a spot on the route where people have a tendency to go wrong, and so the Two Moors Way Association have been working with Dartmoor National Park on the idea of adding a little extra signage. No one wants to see the moor covered with signposts, but it is felt that an extra marker stone here will be a positive and helpful step. Everything obviously has to be done in consultation with the landowner (in this case the Duchy of Cornwall), and it’s an understandably lengthy process.

We met at DNPA’s works yard in Bovey Tracey, where stonemason Andy Cribbett showed me the stone selected for the job. Aspects such as size of lettering (MW) and which way the stone should face have to be thought about (quite apart from how to actually get it to the site – see below!) 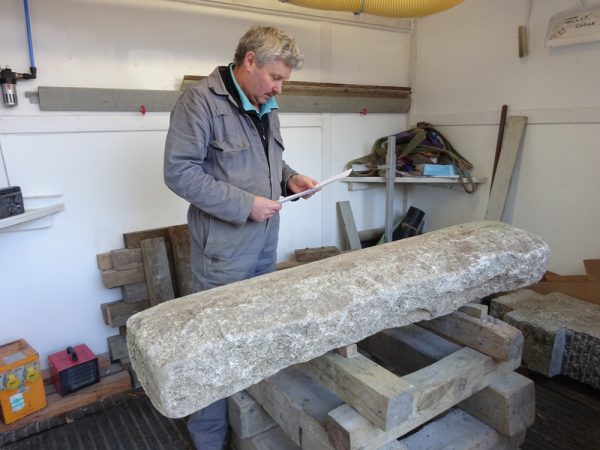 We then piled into the Land Rover with DNPA Ranger Ella Brien and Access and Recreation Officer Ian Durrant, and made our way along the A38 towards Ivybridge. We reached the moor via Cantrel Lane, picking up the southern end of the former Red Lake Railway, opened in 1911 to transport china clay from remote deposits at Red Lake and Left Lake mires to the Cantrel works at Bittaford. By the early 1930s supplies were exhausted, and the track removed. We bumped along the old trackbed for round six miles to reach the Two Moors Way marker stone directing the route off the trackbed (you can see the stone to the right of the photo). 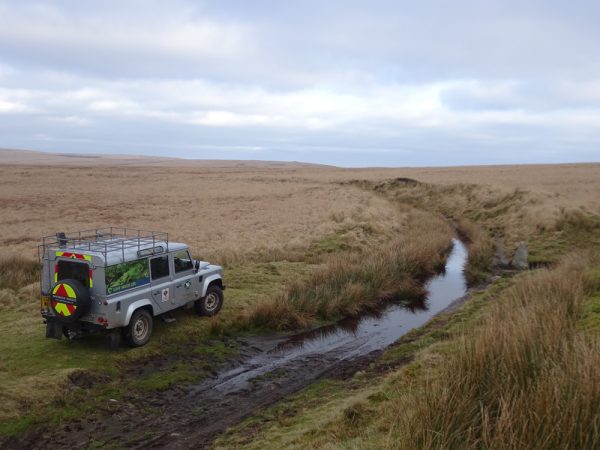 The next photo shows the problem here: two worn paths lead off the trackbed at this point, and some walkers intending to follow the Two Moors Way head for the low mounds of spoil rather than sticking to the route, which is the path on the left. The plan is to set the new marker stone at a point where it can be seen from the trackbed, giving walkers a clear indication of which way they should go. 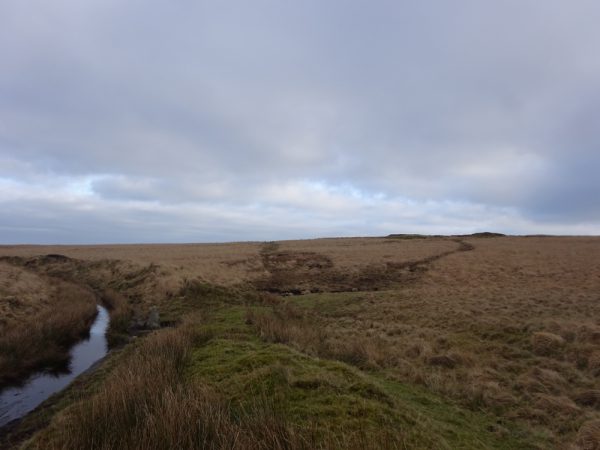 Having worked out where the new stone should be sited, we decided to go and have a look at the new clapper bridge over the Western Wella Brook (installed last month), so we followed the route of the Two Moors Way down into the valley of the Avon, which is crossed via a 19th-century clapper bridge below Huntingdon Warren. 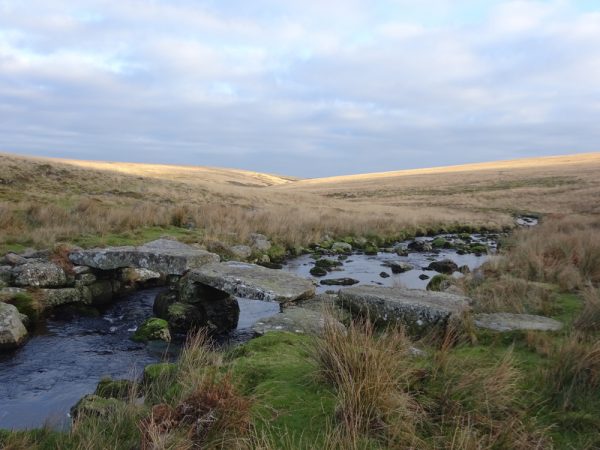 The new clapper over the Western Wella Brook (just by Huntingdon Cross – see below – also on the route of the Abbot’s Way) will be a huge help to anyone walking in this part of the South Moor. Thanks are due to Dartmoor National Park, Totnes Ramblers and South Devon Ramblers for making it possible (there’s a plaque on the bridge). 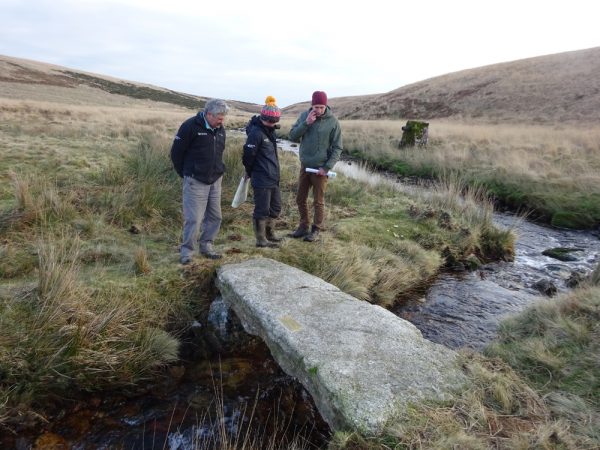 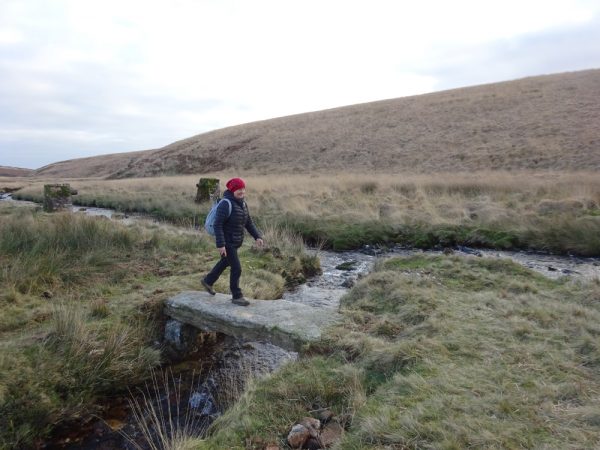 I felt I had to cross the new bridge (just to check that it works!). We also spotted that some other improvements to the route in this particularly wet area have been carried out too – many thanks! 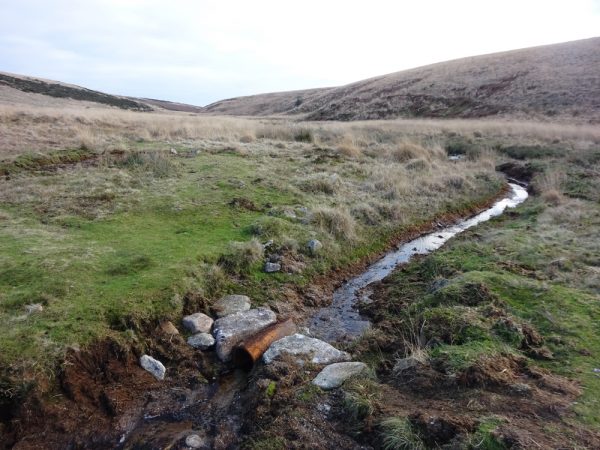 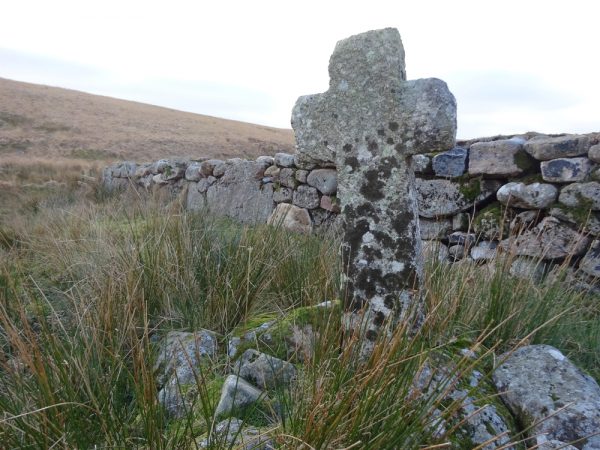 We headed back along the Two Moors Way towards Crossways and the Land Rover, just as the clouds parted – the light was incredible – we were so lucky to be there! Once back at the Red Lake Railway and DNPA team spent a while thinking about how to transport the new marker stone the last 100 yards or so, across very difficult ground. The trackbed immediately north of the existing marker stone is pretty much impassable. 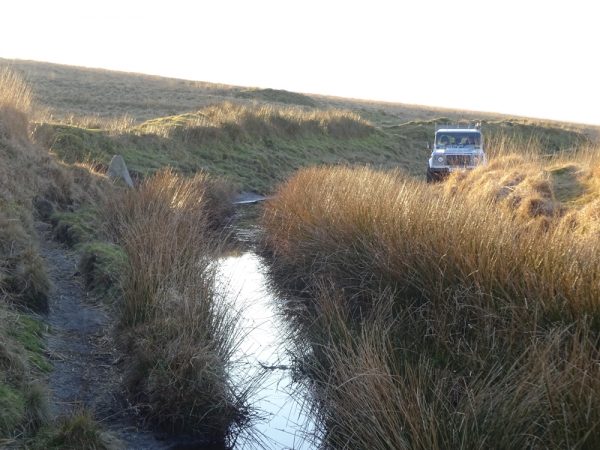 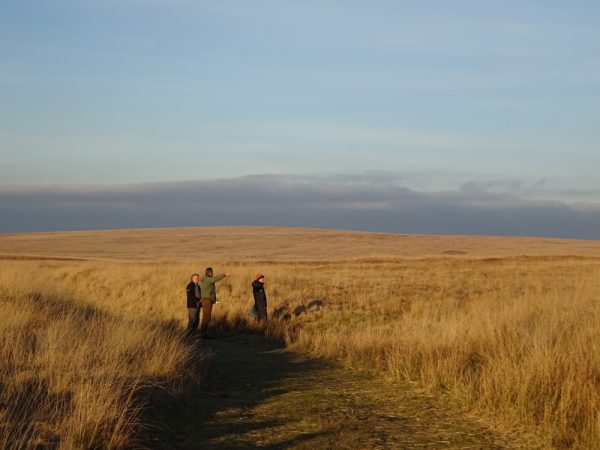 What a fantastic day to be out on the moor! Thank you to Ian, Ella and Andy for letting me tag along. 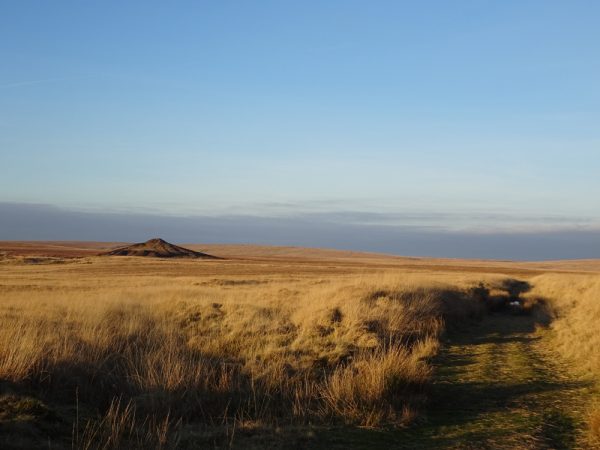