Haytor – from all angles! A stroll around a Dartmoor landmark

Well – I’m back in the thick of it! The autumn issue of Dartmoor Magazine is well underway, and the majority of words and images are now with our designer, Becci. I still have to work out what to do with my Editor’s Letter, and the News pages (there will be some – probably fewer than usual), and as for the Diary… Some of our advertisers are understandably cautious about taking ad space in this issue, for a number of reasons. And it’s unlikely that the hotels who usually take copies for their rooms will be able to do that this time. Still – we’re coming back, and we’ll work it all out somehow.

We’ve got a bit of a focus on the Haytor area in this issue: September marks the 200th anniversary of George Templer’s Granite Tramway, constructed to transport granite from his quarries in the Haytor area to New Quay in the port of Teignmouth, via the Stover Canal (built by James Templer, George’s father, and opened in 1790 to transport ball clay from the Bovey basin) and the Teign estuary. The celebrations planned for September 2020 have of course been postponed. I’m not going to go into any more detail here – you’ll find two excellent articles from Phil Newman and Tim Jenkinson in the autumn issue. But – knowing that the anniversary was coming up – I decided last year that my autumn 2020 Walk & Eat would focus on the Haytor area too. 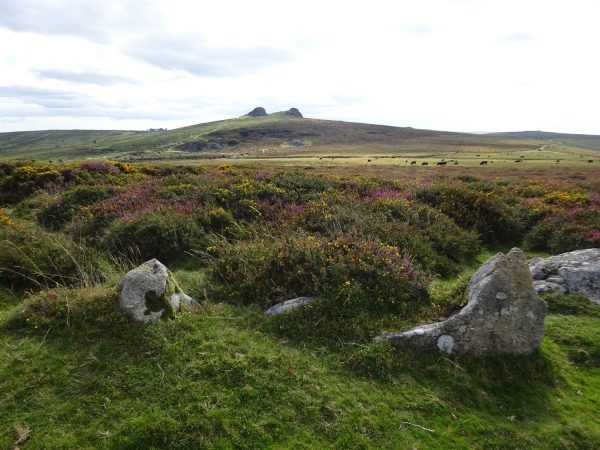 It’s not part of the moor I visit often: I find it too busy most of the time. But I do take it in on longer walks, and I’ve recently explored it in a little more detail when walking a section of the Dartmoor Way from Ashburton to Bovey Tracey (which crosses the River Lemon before heading northwest to the Rocks, then east to pick up the tramway which is followed through Yarner Wood). Having a little more time than usual in recent months has meant I’ve been able to make several visits – and I now have a collection of photos of Haytor Rocks ‘from all angles’!

It’s also a great area for a spot of tor identification. My route first visits Smallacombe Rocks, from where there are fantastic views across the valley of the Becka Brook to Greator Rocks and Hound Tor beyond; and you can pick out the tower of Manaton church, too. 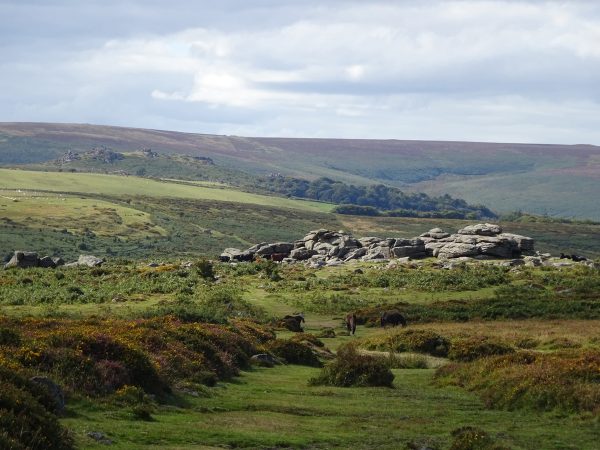 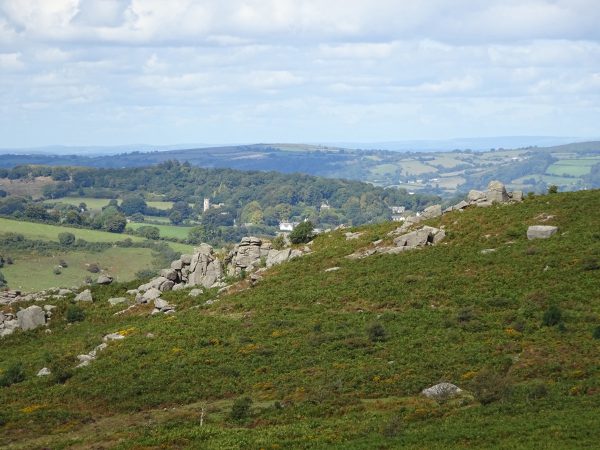 Next I head along the tramway, passing a spur to Holwell Quarry, to reach the waste heaps at Rubble Heap quarry, from where there is a wonderful view of Haytor Rocks.

Next I head for Emsworthy Rocks… I realised when I looked through my photos that I’d picked up Hound Tor again in the distance (sometimes it’s quite tricky working out what you’re seeing when you look back through photos taken a while ago – no doubt someone will tell me if I’ve got something wrong!). 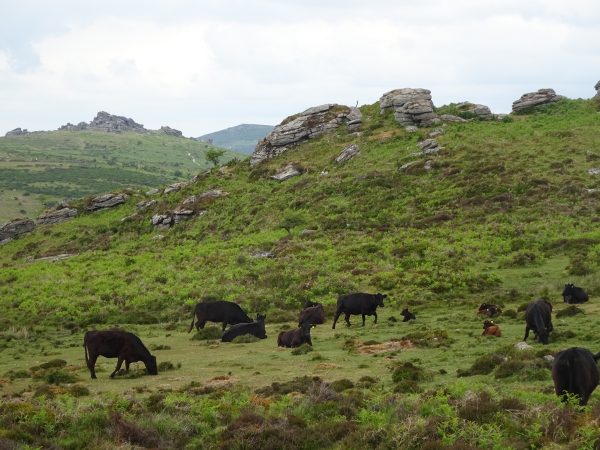 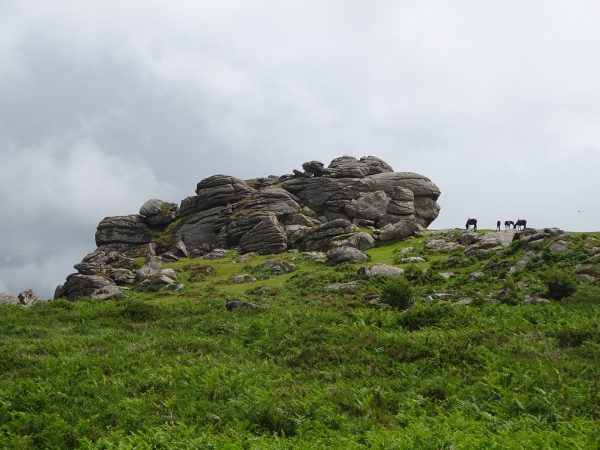 … before approaching Haytor again, this time from the southwest – very different from the classic view. 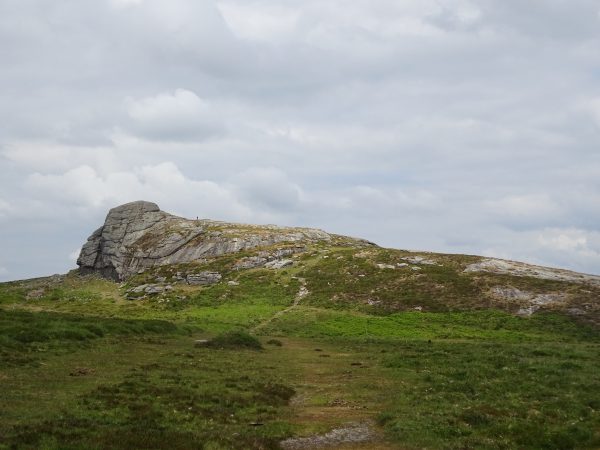 I then give people the option of a short cut, which heads straight up to the Rocks. 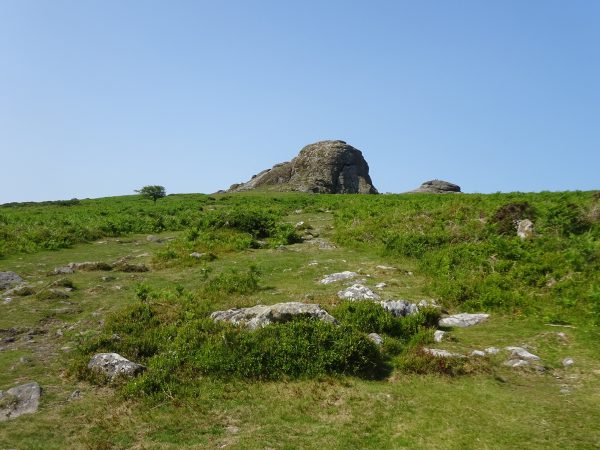 The longer walk heads southeast across Bagtor Down to cross the River Lemon, then returns to Haytor Down via Haytor Vale. There’s even a view of the Rocks from there (fortunately we missed the approaching downpour). 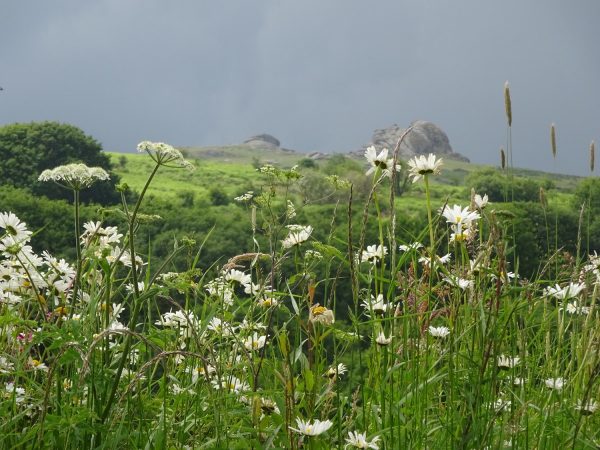 So I guess what I’m really saying is that there is so much more to this area than the usual quick walk up to the Rocks, a brief glimpse at the tramway and maybe a nose around Haytor Quarry ponds. The walking is pretty easy, the views spectacular, and seeing Haytor from different angles affords some great photographic opportunities. I’ve really enjoyed my explorations. 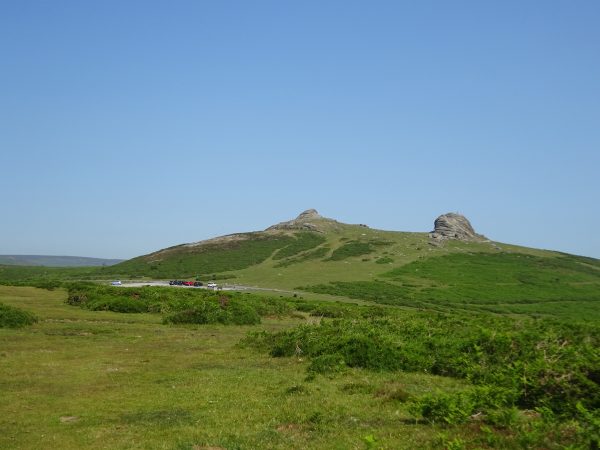 All that’s left for me to say is that I hope everyone is keeping safe and well, and that I look forward to sharing the autumn issue with you. It’s nice to be coming back.