In a ‘normal’ year we would  have been out this week delivering stock of the summer issue of Dartmoor Magazine to our 80+ sales outlets all around the moor. We’ve been in touch with all our outlets, many of who have been working flat out during recent months to keep supplying their customers with vital products. It will be interesting to catch up with everyone when we get out there with the autumn issue at the end of August… which, although it sounds (and is!)  months away, will be on us before we know it. I’ve also been keeping in touch with the team of DM contributors, all of who (I think!) should now know what they are due to supply for the autumn issue. I’m not sure where we’ll be in the way of News items, but there’s some great content planned for that magazine. One contributor who is particularly relieved to be ‘allowed out’ again now that lockdown is over is Deborah Martin, long-time contributor of the excellent long walk routes in the magazine. We get together every now and then to talk about future plans, since the walks need to be done a year in advance so that the photos show the relevant season. We also need to make sure that Deborah’s long walk and my short walk don’t clash (in the autumn issue Deborah will be in the Belstone area, and I’ll be at Haytor).

This spring, during the ‘only exercise near home’ period, Deborah’s frequent visits to Hembury Woods have resulted in this lovely diary detailing her close observations of the changes to flora and fauna. We’ve had such a hot and dry May that the wonderful freshness of spring already seems like a distant memory!

With the current restrictions on travelling, only the nearest part of the moor is accessible, so I’ve varied my walks by making regular visits to Hembury Woods beside the River Dart, within walking distance of my home. In spring changes in the woodland are rapid, more so than the gradual transformation of the moor. Here are some of my photos and observations over a few weeks this spring.

11th April
As I approach along the lanes, the overall appearance of the wood is still predominantly pinkish-brown; but closer-to some trees are starting to come into leaf. It’s sunny and several butterflies are flying around: brimstone, peacock, large white, orange-tip and speckled wood. Stopping near a leaning tree trunk I notice a treecreeper repeatedly working up and down the trunk. There’s much birdsong. Further uphill I glimpse a roe deer hind, but she quickly runs off. In the hedgebanks and beside the woodland paths primroses, celandines and violets are flowering. 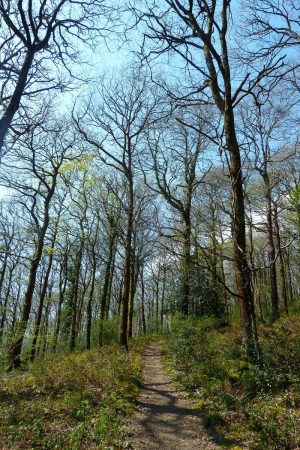 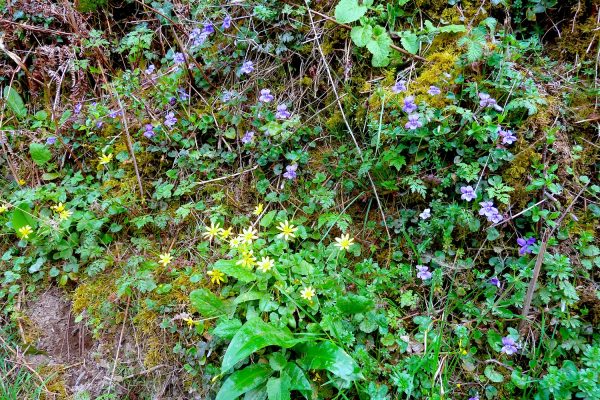 16th April
It’s been dry for some time and the river is very low. Pebbles are clearly visible on the river bed. A dipper is bobbing on rocks above the surface and a mallard flies past. Beech and silver birch have opened their leaves, the oak just in bud. White wood anemones are everywhere; on the riverbank a clump of anemones pushes up through woodrush and unfurling ferns. Up at the hillfort the oak trees around the motte of the Norman castle are tinged with green. In the clearing here violets have become bleached by the sun. 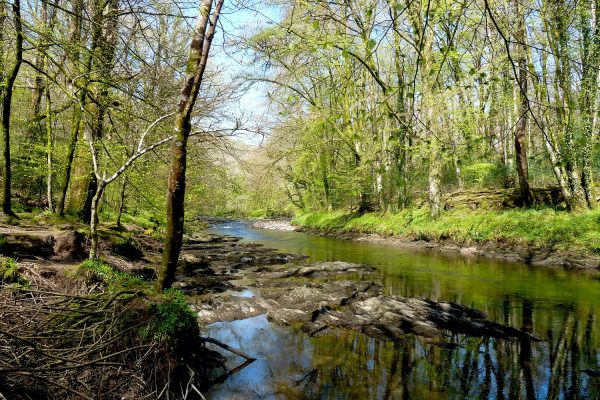 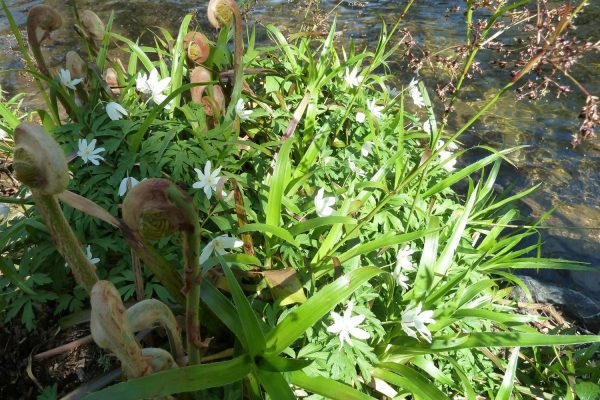 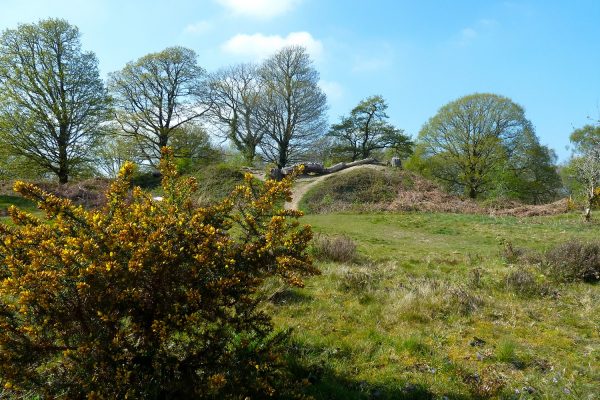 24th April
The tree canopy is changing daily in this April’s warmth and sunshine. Bright yellow-green oak leaves are now opening, though sunlight still reaches the woodland floor where the whortleberry’s tiny reddish flowers hide in the leaves. In the hedgebanks bluebells and wild garlic are in flower and in places there are patches of intense blue germander speedwell. In the woods the bluebells are in bud, some already open. A roe deer vanishes into the trees. The river is still low and grass is growing on rocks above the surface. A female goosander glides upstream low over the water. In the calm stretch between the rock ledge and the island the trees have mirror images [see header photo]. 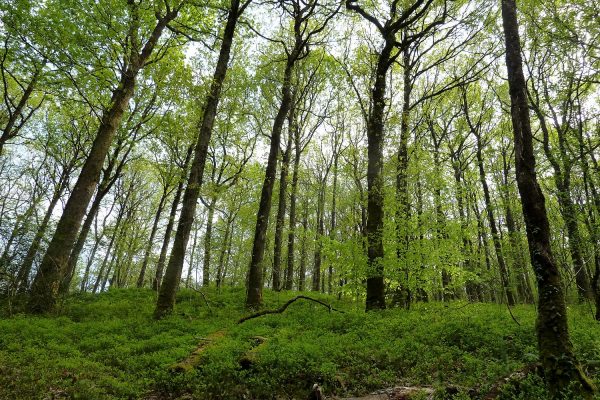 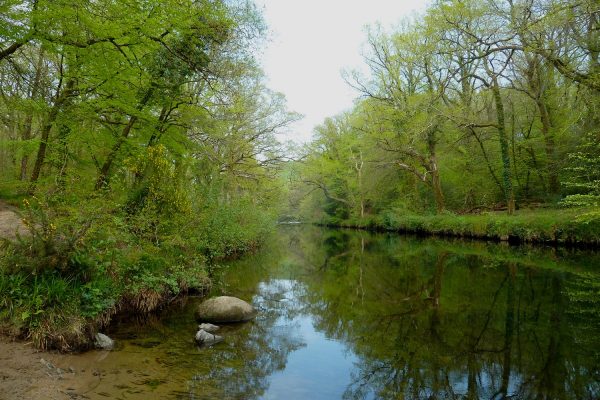 1st May
In three weeks the wood has transformed itself. Even from a distance it’s now varying tones of green. On the way there the hedgebanks are full of stitchwort and the delicate white flowers of hedge parsley (always known as ‘Keck’ when I was a child). After two days of rain there’s now more water in the river and the rock ledge has its cascade again. A grey wagtail flits between the rocks on the ledge, searching for insects. The goosander is here again. Lots of oak seedlings are pushing up through the ground cover. The bluebells have opened in the woods. In the clearings around the hillfort it’s more of a contest: will the bluebells complete their flowering before the emerging bracken overshadows them? The mature oak trees around the castle mound are now well in leaf; luckily they’re out before the ash around the outer bank of the hillfort (though they usually are, however the summer turns out). The wood is now at its most varied and vibrant best. 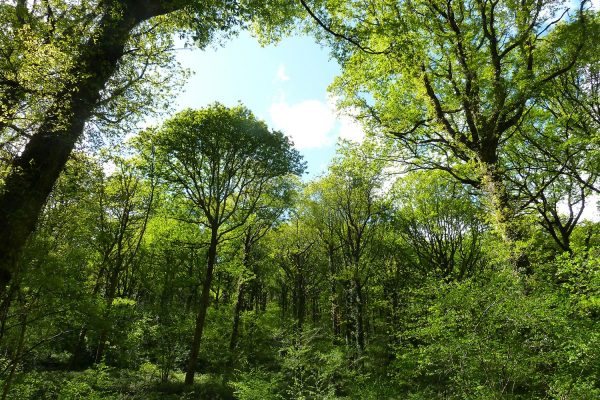 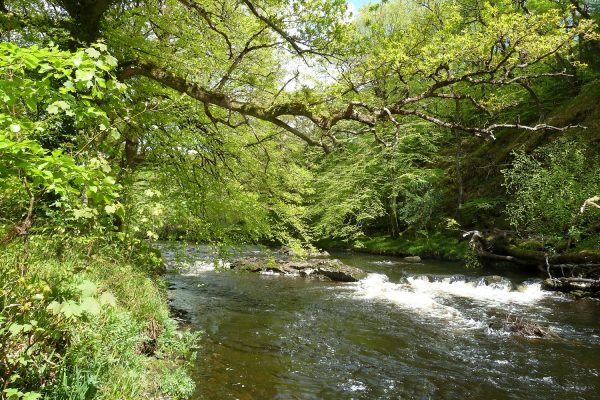 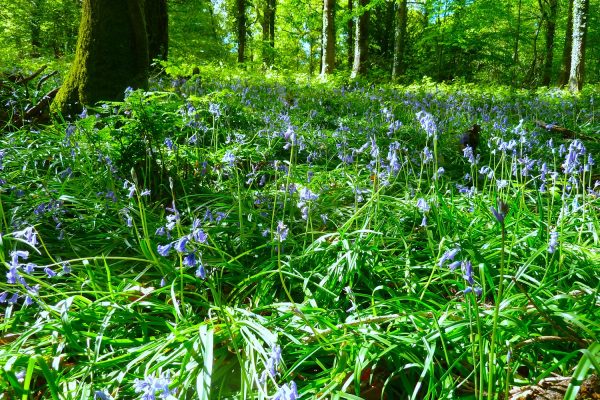 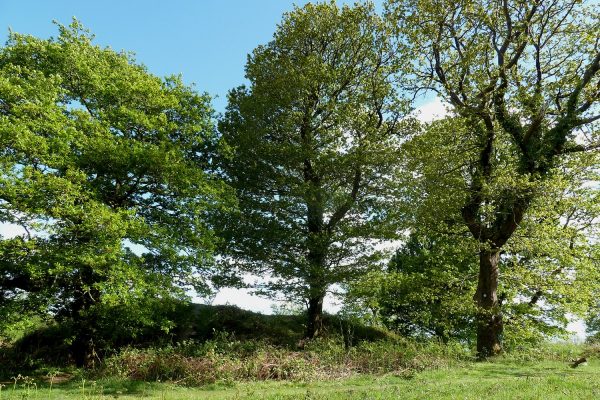 Thank you Deborah! I too am pleased to be able to go a little further afield – not that I haven’t enjoyed my local explorations – but getting back onto the Dartmoor Way (walking the route and writing up the directions for the upcoming website) has proved a welcome break from a sudden flurry of freelance editing work (and those deadlines…). Last weekend I walked the 11 or so miles from Shipley Bridge to Ashburton with (and socially distanced from) the DW project officer. As you can see from the photos below the moor is starting to green up a little around the Avon Dam Reservoir and there were still a few bluebells just below Water Oak Corner. All in all it’s a beautiful stage of the route. 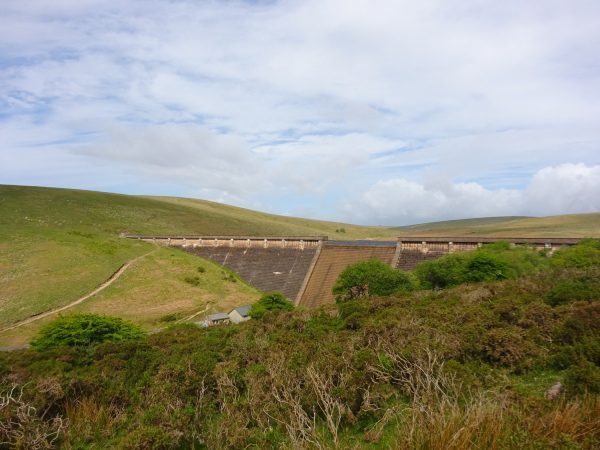 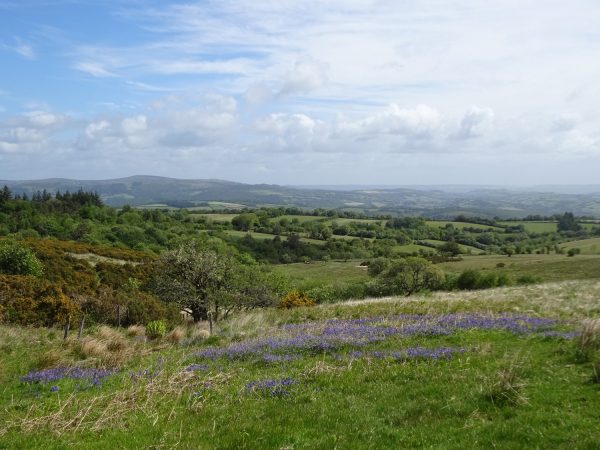 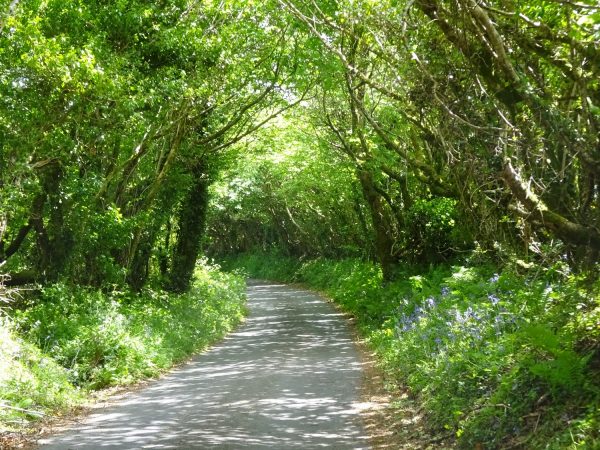 My next task re the magazine is to double check the content for the autumn (and winter) issues and try to fit it all into the layout ( how much advertising we’ll be able to sell is an unknown at the moment, but we’re hoping that local businesses will see the autumn issue as an opportunity to tell the world that they are still up and running). I also need to look ahead and and start slotting in articles throughout all the 2021 issues. It’s like one enormous and rather complicated jigsaw puzzle!

Haytor – from all angles! A stroll around a Dartmoor landmark