Having more time at home has given me the chance to give the office a good clear out (and possibly) spring clean. It’s been really satisfying on two counts: firstly because I like to work in a relatively ordered space, and secondly because I have found all sorts of interesting bits and pieces with which I always intended to do ‘something’ one day. I’ve also returned various bits of material to their owners (apologies for the, in some cases, lengthy delay). I’m very lucky here at Steward Cottages – mine is the middle cottage in the terrace (just two windows and a front door!). In my back garden, which backs onto the old railway line (now Wray Valley Trail), there’s a very nice granite-built barn (below – I planted the wisteria when I moved here twenty-five years ago) which houses my office. So I do ‘go out’ to work: it may only take 10 seconds from my back door, but it makes all the difference in terms of separating work from home space. 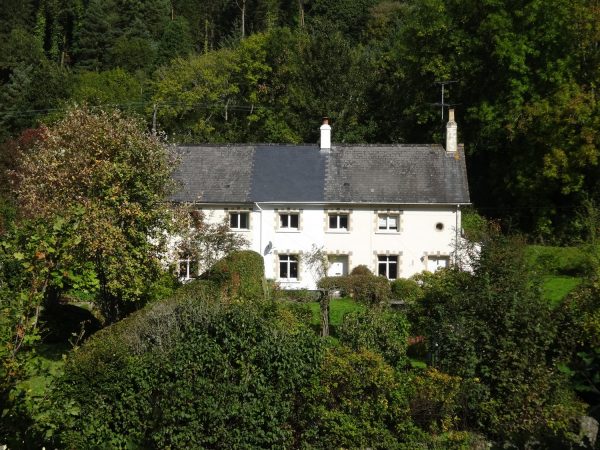 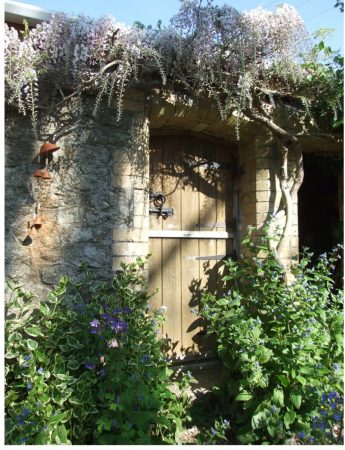 One of the things I’ve come across in my clear out is an evocative piece of writing by Carol Sandiford, who used to live next door to me with her husband Adrian (artist and local postman) and son James. They moved away years ago, and sadly Adrian has since died. Back in about 2005 Carol did a bit of investigation into the history of Steward Wood Farm, evidence of which could then be seen under a heavy growth of laurel off the track leading into the woods behind the cottages. I remember when I moved here exploring around the area Carol mentions in her piece below and finding evidence of granite steps and gateposts. The wood is now out of bounds so I can’t post any photos taken inside the area, but the header photo was taken last May on the footpath leading from Budleigh Farm to Pepperdon, just above the top boundary. The photo below shows the southern end of the wood, seen from the other side of the Wray valley above Wray Barton. 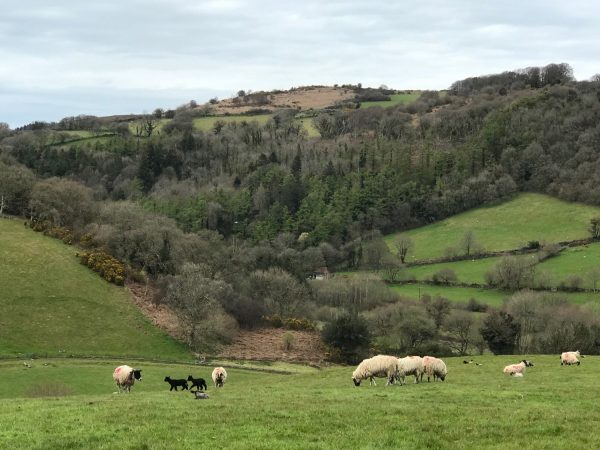 Steward Wood is thirty-four acres of mixed woodland lying at the head of the steep-sided Wray valley on Dartmoor. In summer, viewed from below, it’s a tapestry of varied greens, with conifers and deciduous trees creating a rich blend. Beneath the canopy of the trees, there are bluebells, foxgloves, spurge, alkanet, and the buzzards wheel and mew overhead. In winter the paths can turn to streams, miniature white waters rafting the autumn’s leaves rapidly down the slopes, and periodically trees fall in the high winds.

At the end of the nineteenth century there was a house in Steward Wood, a house and a stable block. Still the main path to the woods is flanked by massive granite walls, laurels grow where there were once hedges and walks, and the woods are scattered with garden escapees, double-flowered daffodils, snowdrops and flowering currant bushes. Old granite gateposts mark the entrances to fields at intervals through the woods.

The house took its name from the woods or the woods from the house: Steward Wood. In May of 1861 the house was put up for auction. It was advertised as a ‘neat cottage residence’, the owner of which had ‘expended a considerable sum on its improvement’ and it had ‘stables, garden, lawn’, thirty-seven acres of land made up of wood, pasture and orchard and the river Wray flowing through it. It was, said the advertisement, a property specially adapted to be that of ‘a gentleman fond of agricultural and country pursuits’.

The house is still there in the 1881 census when it was occupied by a blind widow of 77, her unmarried sister and her three unmarried daughters whose ages ranged from 37 to 44. Were these the last people ever to occupy the house? It’s easy to feel a sense of chill and foreboding reading the make-up of that household of 1881. It seems a long way from the attractive cottage which was suitable as a residence for ‘a gentleman fond of agricultural and country pursuits’. By the turn of the century the house was gone, and by the end of the First World War the stables also. Fifteen years ago it was possible to see the space where the house must have been, but rampant vegetation, made even denser by global warming, has done its work and now the remains of the driveway and the garden walls are all that remain.

As for the woods themselves, they passed through many hands until in 2000 they were bought by the Steward Woodland community, intending to set up an experiment in sustainable living and, for the first time in over a hundred years, the woods are inhabited again. Whether or not the settlement should be there in a National Park remains a matter of debate, but the community has permission to continue with their experiment and to the cottage with its lawns and stables has been replaced by benders and a long house, not quite where the original house stood but not so very far away either. Once more there are voices in the wood, the voices of the people who live there and then, in the spring of 2002, a baby was born to two of the community and so, in a very real sense, life has been brought back to the woods and Steward Wood is a family home again. 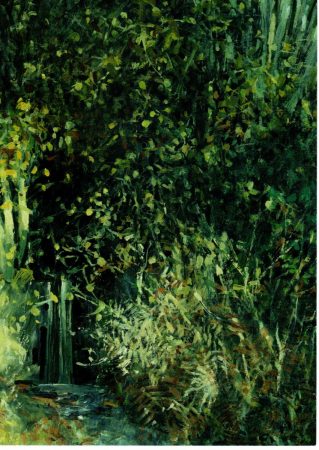 Adrian Sandiford used aspects of the wood as inspiration for many paintings, and the one above – one of the many springs then running through the woodland – is a marvellous portrayal of how the woods used to ‘feel’ when almost no one went there (before the community moved in: they were finally moved on by Dartmoor National Park Authority a couple of years ago.)

I’ve done a little digging of my own and have found the following information on the Heritage Gateway website, which details the gradual disappearance of the farmstead:

Steward Wood farmstead shown on 19th century maps as ‘Steward’ and ‘Stewardwood’. Steward was mentioned as ‘Storygge’ in the 15th century. Farmstead 1800–1900AD

Only the eastern group of buildings remain at ‘Steward’ on the early 20th century map.

A book I read recently – written by an author who had taken up long-distance walking all over the country – described how he started  his ‘journey’ by drawing a circle on the OS map, using his house as the centre point, and then spent time wandering along the lanes and rights of way within the circle: close to home. It’s a good piece of advice for those of us who live somewhere that’s possible, and who can still get out and explore in this strange new world. 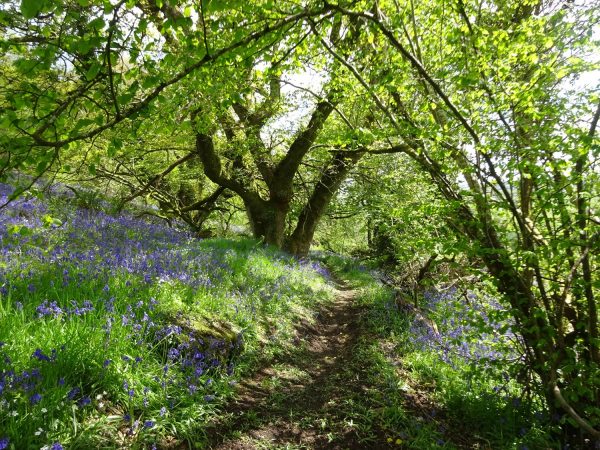 So there you have it – another rather personal blog post! I promise that the next one will come from one of DM’s contributors or subscribers… I’ve received some great material to share with you.