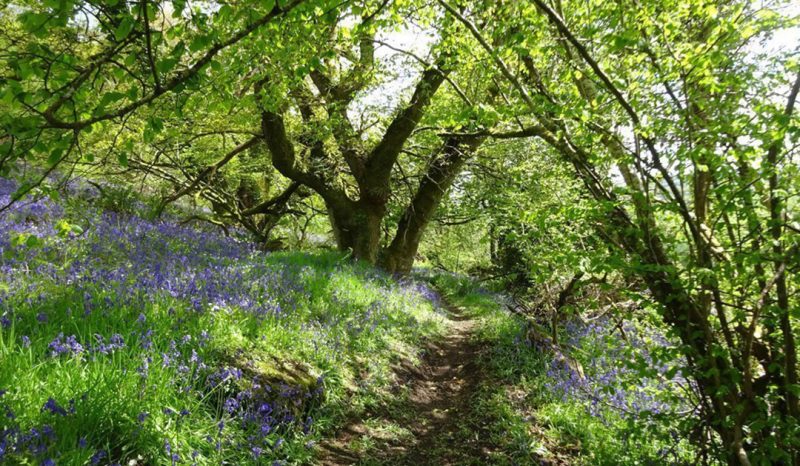 Ten Tors and bluebells: a beautiful weekend on Dartmoor (and a long blog!)

It’s been a stunningly lovely weekend and I’ve managed to spend almost all of it outside! Yesterday saw me up at 4.45am and off to Okehampton Camp to watch the start of this year’s Ten Tors Challenge (more below). When I came home I decided to walk ‘the long way round’ to Moretonhampstead. Photo 1 (above) shows the footpath that winds its way across the lower slopes of Hingston Down en route to Pepperdon Common, from where there are pretty good views of Moreton and the north moor in one direction…

… and Haytor in the other!

From there I picked up the lane to Cossick Cross, the hedgebanks full of spring flowers. More good views towards the east end of Mardon Down, which stands above Doccombe.

I crossed the Exeter road and headed up to Mardon Down, turning left along its southern edge, then picked up the bridlepath to Yarningdale.

And so to Ten Tors, which took place this year in near-perfect weather conditions. Yesterday morning I watched as around 2400 teenagers, fully loaded in preparation for two days and one night camping on the moor, made their way to the start.

At precisely 7am (after prayers, a countdown and gunfire!) they set off, teams of six each following one of 28 routes, walking either 35, 45 or 55 miles. It’s an astonishing undertaking. We also watched the start of the Jubilee Challenge, a one-day expedition designed for young people with a range of physical, mental or educational challenges. A large crowd clapped and cheered the participants on their way.

Today I decided to walk from Belstone via Cullever Steps towards the Camp to see what happens at the end of the two-day challenge. I’ve been at the finish before, but never out on the moor in the immediate area. We set off from Belstone to Cullever Steps, above which stands an Okehampton/Belstone boundary stone.

Teams were heading down from the Oke Tor direction, so we steered clear of the track from Cullever Steps and headed up alongside the pretty little Black-a-ven Brook (photo taken looking back to the Belstone Tors).

At the top of the hill we met the military road, from where it was possible to spot tired TT teams coming from all directions. Several stopped at the hilltop to don costumes, pick up flags etc for the final descent to the finish at the Camp. We met one team of five who had lost their sixth member fairly early on, and saw another with one member carrying two rucksacks to help a struggling colleague. I take my hat off to the lot of them: what an amazing achievement.

Having wished them all well we headed back to Belstone, paying a quick visit to the Nine Maidens stone circle on the way.

Tea and cake at the Old School Tearoom made THE perfect end to a perfect weekend!