I’ve had such a lovely week! I’m in that ‘mid-magazine’ period – the spring issue is done and dusted, and all the contributors are working on words and pix for the summer issue. Each time the magazine is published I have about a month in which I can catch up on other work and – most importantly – get on with any ongoing walking projects. And the weather this past week has been perfect.
At the moment I’m rewalking The Dartmoor Way in connection with a guidebook commission. I’ve walked it all before (108 miles around the edge of the Moor, with a 23-mile High Moorland Link between Buckfast and Tavistock), and wrote the route directions for the website, but really need to do it all again. Whenever you revisit a route – even after only a few months – you’re likely to find that some things have changed, even if only very slightly. For example a handily placed bench at the top of a long climb through Houndtor Wood near Water has disappeared – the signage around Pullabrook has changed – and (which I discovered a little while ago after heavy rainfall) in winter there’s deep standing water at the top of Bowden Hill on the Buckfastleigh to Ashburton stretch! Such things need to be noted in the route description.
I’ve also been a bit concerned that the recent storms might have ‘removed’ some useful trees! When describing a route across unsigned moorland (there are several stretches along The Dartmoor Way) it’s useful to be able to point people towards a natural feature – and a solitary tree on the horizon is a gift. Last weekend I went out to check my directions from the River Lemon up to Haytor Rocks, across the bracken-covered southeastern slopes of Haytor Down. As usual there are lots of paths to choose from, but there’s a handy holly tree to aim for… thankfully it’s still there.

From the top Haytor car park the route runs past the rocks, then picks up the Haytor Granite Tramway en route to Bovey Tracey. Rewalking the route at different times of the year also means I can get some new photos for the guidebook (although scarily I now have 19,000+ images stored on the Cloud!). 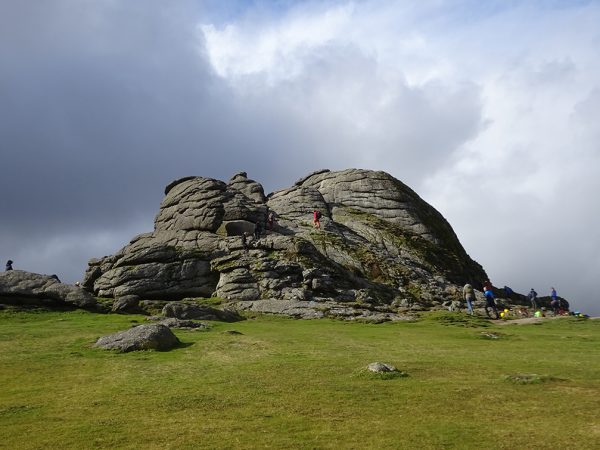 My next outing took me right across the Moor from home, to work on the Shaugh Bridge to Ivybridge section – the claypit landscapes explored by Deborah Martin in the winter 2021 issue of Dartmoor Magazine. Here there’s a low-level/poor weather option, for those days when the cloud is sitting low on Shell Top and Penn Beacon. We made up a great circular route, going out on the low-level option and back on the main route (I have to record the route in both directions for the guidebook anyway). It’s an extraordinary area, and well worth exploring: Saddlesborough (trig point below), Wotter, lovely Blackalder Tor, Lee Moor, the Delamore woodlands and Cornwood on the way out; beautiful views across to Piles Hill, then the slopes of Penn Beacon and Blackaton Cross on the way back. 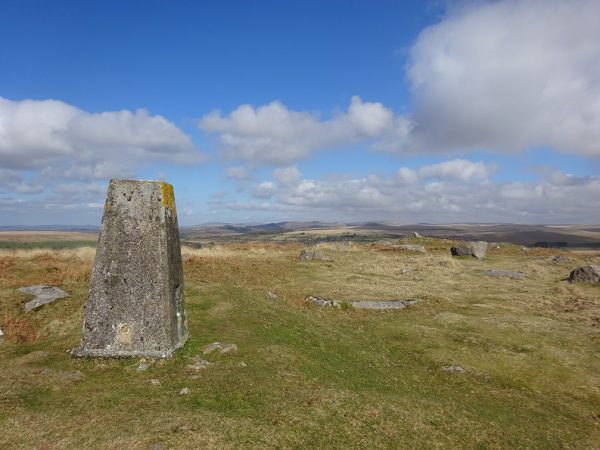 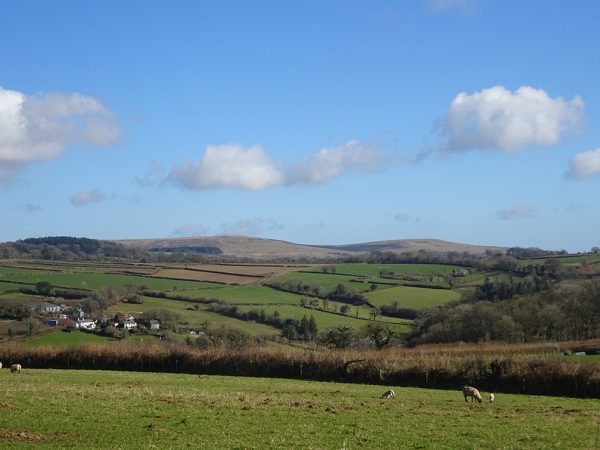 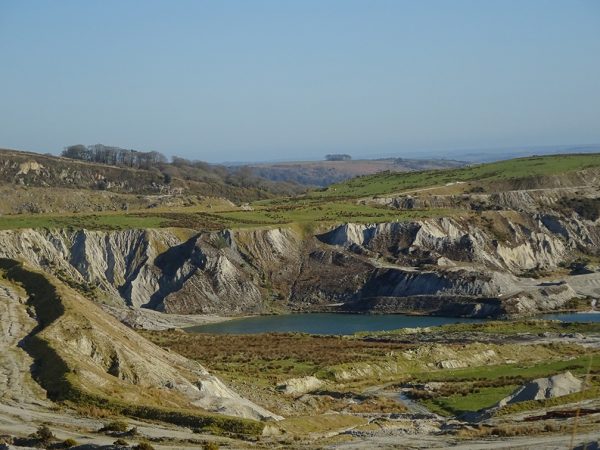 Next came a walk from Buckfastleigh to the Avon Dam Reservoir (there and back – the Shipley Bridge to Ashburton stage). It’s a really beautiful section – and the photo of Lambs Down below serves as a reminder that I need to go back and take some more photos in May, when there’s the most fantastic display of bluebells here (the right of way runs through the middle of the down). 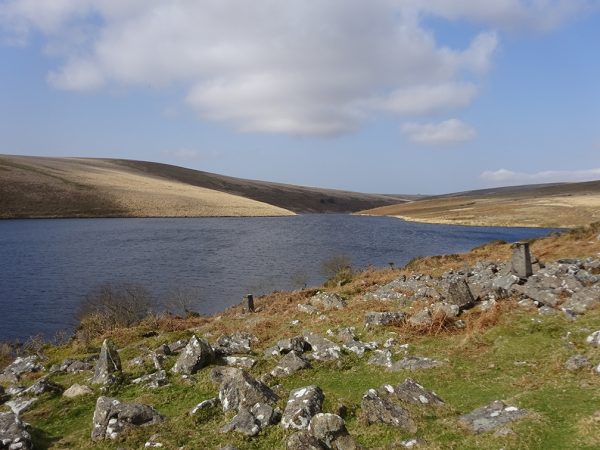 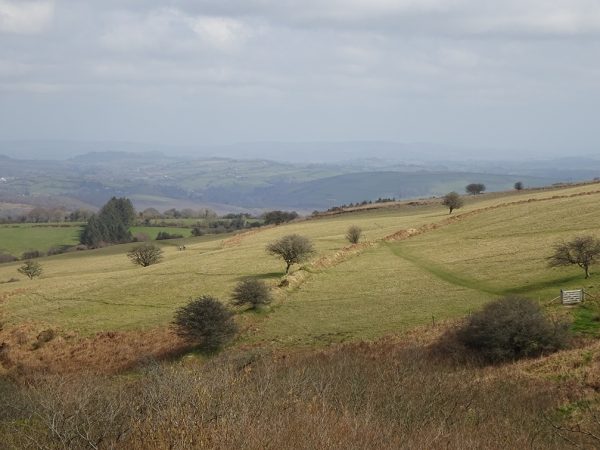 Mu final two outings this week saw me walking from Pullabrook Wood (at the southern end of Lustleigh) to home (the Bovey Tracey to Moretonhampstead stage – photos not yet downloaded), and also giving a quick check of the route where it passes below the Sourton Tors (Okehampton to Lydford stage). Again, a glorious sunny morning full of skylarks and ravens – and a very strong easterly wind! The daffodils in the churchyard at Sourton are stunning at the moment (see header image), which was handy – part of my guidebook brief involves a big introductory section in which I need to cover all manner of subjects, including local flora and fauna. 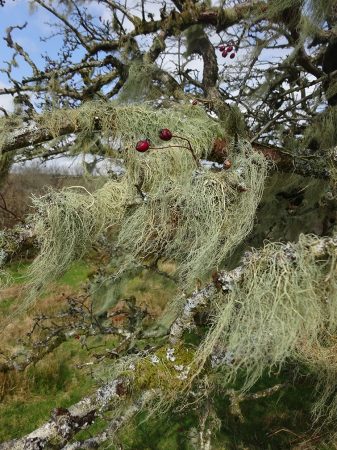 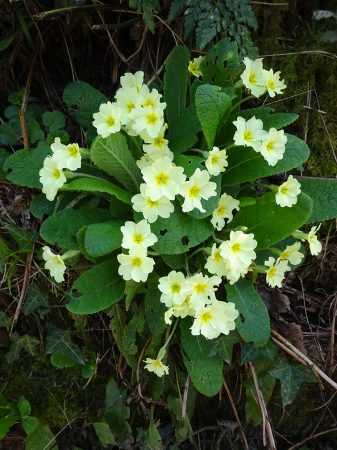 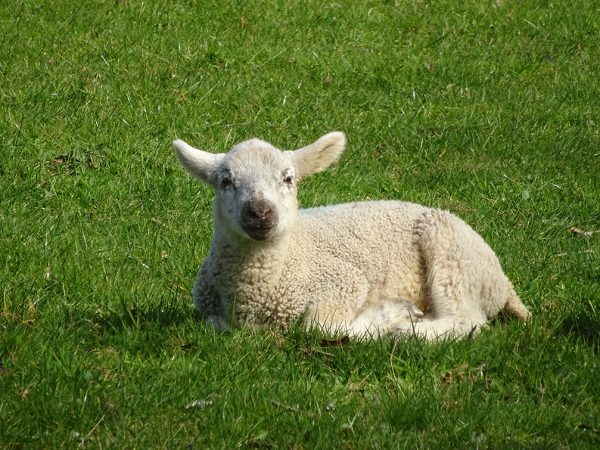 All in all a pretty good week for me on Dartmoor!