What extraordinary times we find ourselves in. As you should all know by now we’re not able to produce the summer issue of the magazine. The spring issue is out, and the summer issue – although everyone has no doubt been writing away furiously and heading for the April delivery date – was at such an early stage it seemed best to cancel it. Exmoor Magazine (who work about a month ahead of us) have decided to go ahead with a slimmed down/no adverts print version for their subscribers only, but taking pre-orders (advertised through Facebook etc) in the hope of catching some of those who would normally buy the magazine at one of their sales outlets. Had we been as far ahead we might have taken the same decision… but whereas I am really sorry to have to disappoint our readers we felt we had no choice with DM. Our set-up is rather different from EM, and to top it all my brother/business partner David is stuck in Thailand. We’ve had a stack of lovely emails from subscribers wishing us well (and saying that now they have time to read all their back issues!), so if you fall into that category many, many thanks.

I have promised to increase DM’s online presence via this blog. It has always been my intention to create a new post every month/six weeks or so, but I see that the last one was on 24 December… must do better! The posts take a bit of time to get together, and I am usually so busy with the magazine and other work that blogging tends to fall by the wayside. But for the next few months I have extended an invitation to my contributors (past, present and hopefully future) to come on board and send me their photos and contributions, so that this blog becomes more of a combined effort. We shall see what happens!

In the meantime here’s Part Two of my ‘review of 2019’, which I started on Christmas Eve and promised to continue a couple of weeks later, but which never happened… I have to say it feels a lifetime ago now.

I’ll start with July, which was a really busy month. 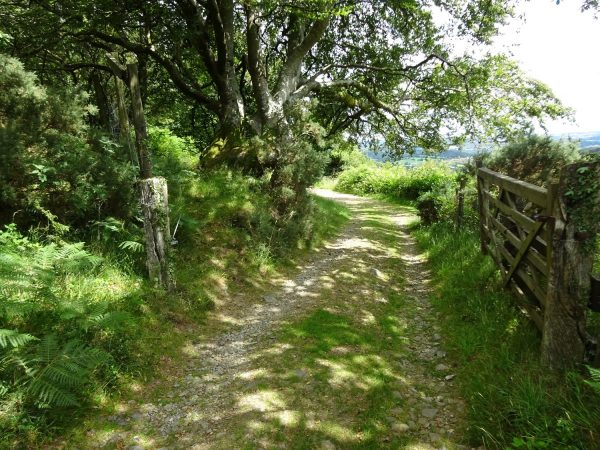 I had to double check my Walk & Eat route for the autumn 2019 issue, which was a lovely 5+ mile circular from Scoriton out to the ‘Ian Mercer’ stone at the head of the Holy Brook valley, then back via Chalk Ford, Buckfastleigh Moor (on the Two Moors Way), Lud Gate and Higher Coombe. It’s a wonderful walk – if you haven’t done it give it a go when we’re allowed out again (there’s a shorter 4-mile option too). The above photo was taken just above Chalk Ford. 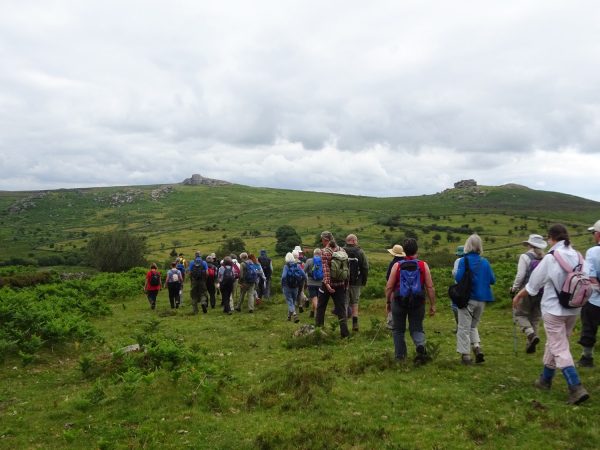 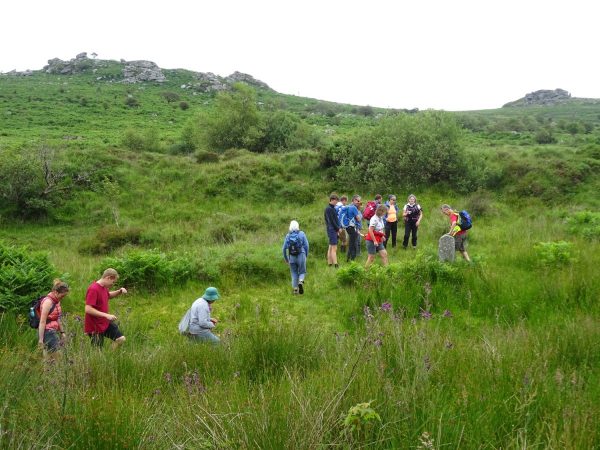 In the same month I was invited to join Ilsington Parish’s Beating the Bounds, which took place over four days. I joined the last day (the complete boundary measures 28 miles), walking the northern boundary from Hemsworthy Gate to Perryman’s Bridge (visiting 18 bound stones en route). As you can see from the photo above some stones were not so easy to access! A new boundary stone was unveiled near the Becka Brook clapper bridge (below) to celebrate the 125th anniversary of the parish council and the 70th anniversary of the National Parks and Access to the Countryside Act (which led to the setting up of National Parks, AONBs and National Trails). And I’m afraid I can’t identify the other stone shown below… forgot to make a note… possibly Owlacombe Burrow? It’s on the run of stones above Perryman’s Bridge (I’m sure someone will enlighten me). 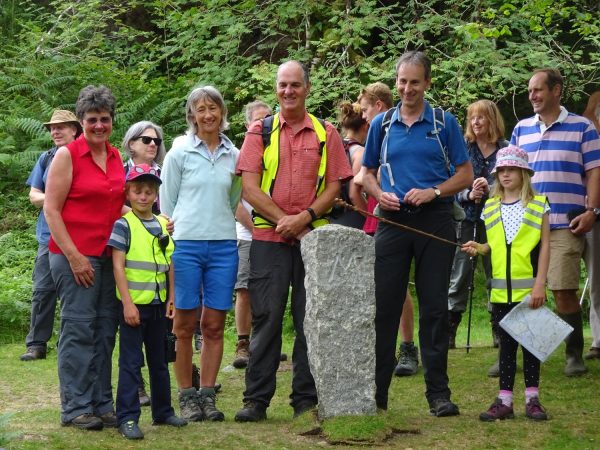 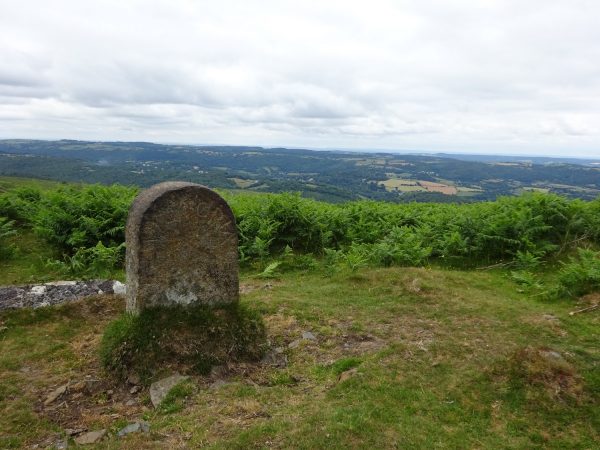 Next in July came a wonderful long weekend with a bunch of walking friends, staying at the Dewerstone Cottage bunkhouse tucked away in the woods above the River Meavy on the west side of the moor. We did three 14-mile walks, the first of which was in torrential rain and low cloud all around Brisworthy, Eylesbarrow, Sheepstor etc – couldn’t see a thing! The next day dawned warm, bright and sunny and we had a magical day. The first photo was taken atop Saddlesborough on Shaugh Moor; the second at Great Trowlesworthy Tor (it’s an abandoned flagpole base) looking towards Ditsworthy Warren. 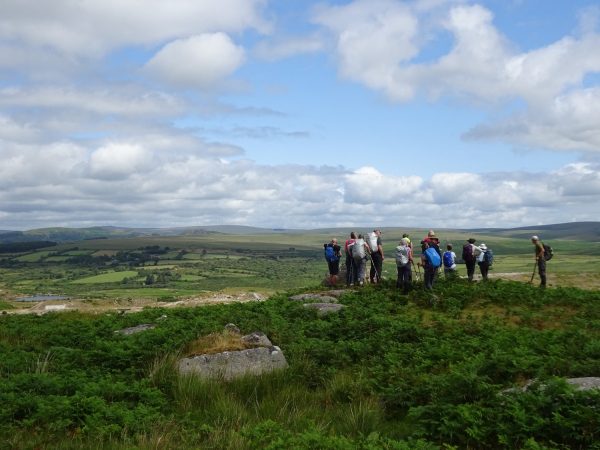 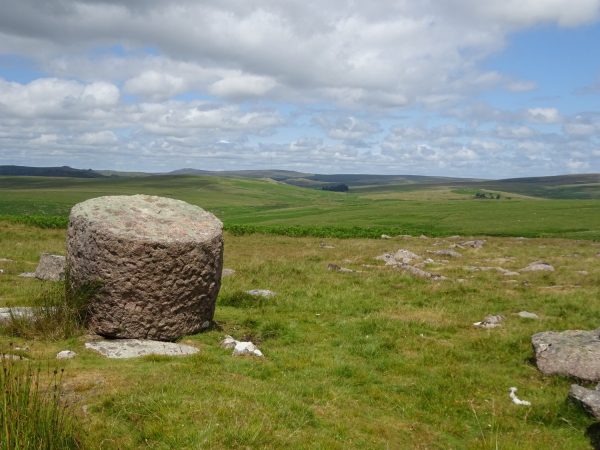 In a normal year August is a busy month for us since we take the Dartmoor Magazine gazebo to many of the local shows. I also managed to get out to Powdermills… I think it must have been in connection with Drew Campbell’s new book on the social history of the gunpowder factory, which was launched last summer (we published it for Drew, and have copies for sale: £12 inc. P&P). The book includes an excellent guided tour around the site, meaning that I can now state with confidence that the photo below shows the highest Incoporation Mill on the site, where one of the most dangerous production stages took place (hence its location away from other buildings). Next time you get out there take a look upslope from this mill and you’ll find the remains of a reservoir, which used to hold the water for powering the mill machinery. 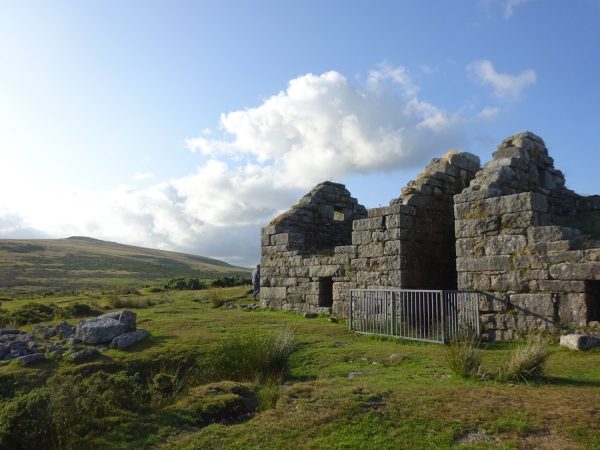 A little closer to home now… throughout the summer holidays Moretonhampstead Information Centre put on a very successful Scarecrow Trail to raise funds to keep the Centre going (we no longer get any official funding). It was very nice on a sunny Sunday morning to explore the town and its environs, and to come across all manner of marvellous creations tucked away in nooks and crannies. Dartmoor’s local information centres are largely run by volunteers who do fantastic work representing tourism and other businesses in their local communities, and deserve to be supported. 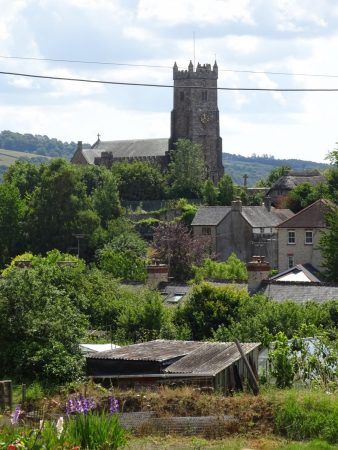 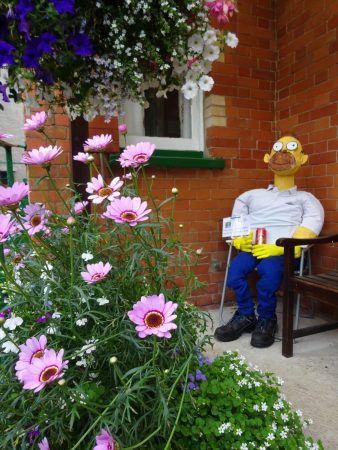 Later in August I set out to the west side of the moor to work out my summer 2020 Walk & Eat route, which I’ll probably now push back to summer 2021. If I can get out this summer I’ll take some more photos too, since I did the walk twice last year and on both occasions the cloud came over and everything looked a little dull. The route starts from Lydford, then follows the Dartmoor Way before heading up to the moor via the Bridestowe beeches (below) and returning via Lyd Steps and High Down. Much of the rest of August was taken up with shows and events – Dartmoor Folk Festival, Chagford Show, Moretonhampstead Carnival Food Festival and Lustleigh Show. The jury’s out as to whether any of these will be able to take place this year (STOP PRESS Moretonhampstead Carnival has just been cancelled, so I assume that’s the Food Festival too). 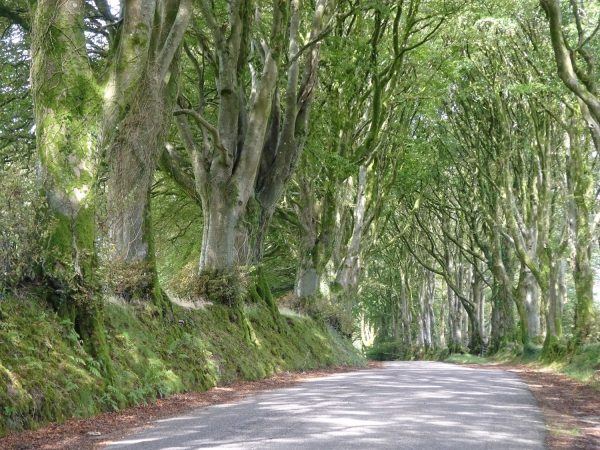 So into September. We grabbed a lovely sunny week away on the Fife coast, staying in the picturesque fishing village of Pittenweem and spending much of our time walking the Fife Coastal Path (there’s a brilliant bus service that makes it all really easy). That’s St Andrews in the distance in the photo. 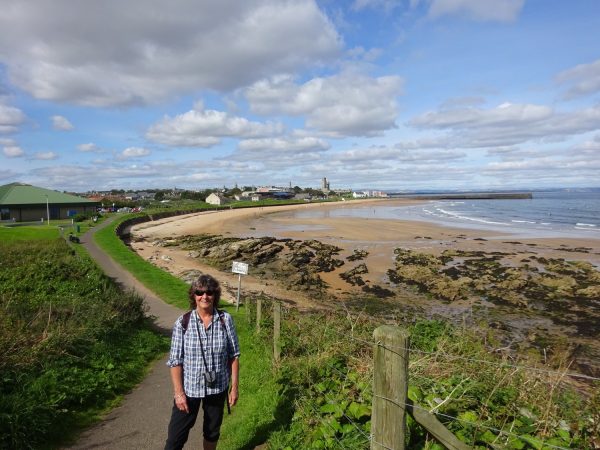 Then it was back to Dartmoor for Widecombe Fair and the launch of our new book Hello There! The Life and Times of Anthony Beard – here’s Wendy (Anthony’s wife) signing one of the 130 copies we sold at the show. Copies are still available (£14 inc. P&P) if you’re looking for something to read! 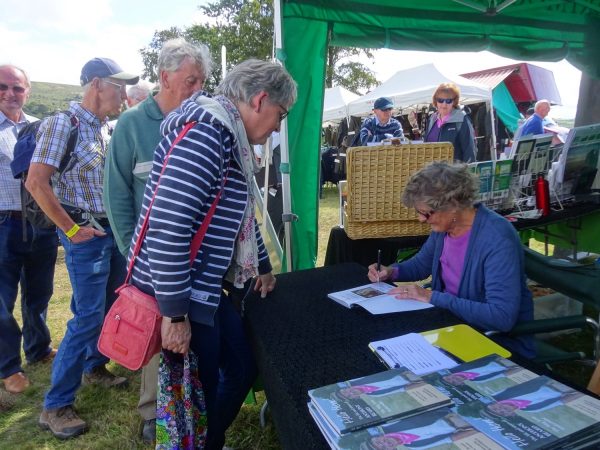 We had a some gorgeous weather in mid-September, before it all started to go downhill (by which I mean the seemingly constant rainfall). One Sunday we went out for an exploration around Great Staple, Roos and Cox tors – it was the most magical afternoon.

So – in conclusion – we must remember that Dartmoor has been there for around 75 million years, and will still be there when all this is over! It’s certainly made me feel better looking back through these photos, and I hope you’ve enjoyed them too. Part Three (October, November, December) will be on its way to you soon. Keep safe, well and happy.