It’s that time of year when Dartmoor changes colour. The hawthorn and rowan are already in full berry and the bracken-covered moorland slopes are turning orange-brown. Find a day of bright autumn sunshine and a brilliant blue sky, put on the walking boots – and you’re in for a treat.

Last weekend I took advantage of a brief ‘break in proceedings’ work-wise and went for an amble along the low-level Two Moors Way on the east side of the moor, from Moor Gate as far as Hurston (shared with the much older Mariners Way, said to have linked Dartmouth with Bideford). We left the car at the parking area on the right above the cattle grid, and walked back downhill to pick up the path at Leapra Cross, where the low-level Two Moors Way (Widecombe to Chagford, Stage 5A) crosses the B3212. 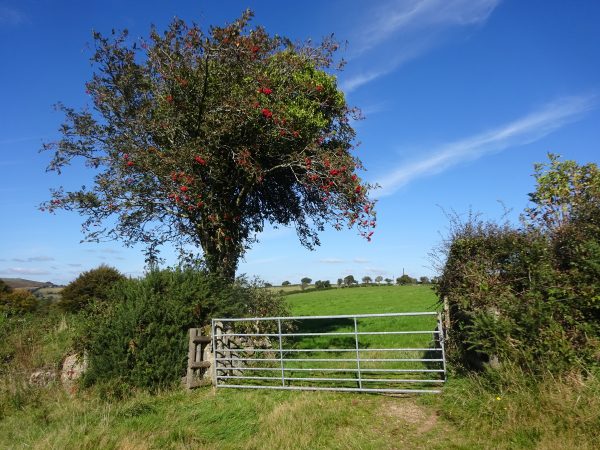 It’s an easy, well-signed stroll through peaceful fields and along hedged tracks past a run of wonderful historic farmsteads (Lettaford, Jurston, Lingcombe, Hurston). The photos below show the shippon end of the wonderful longhouse at Lettaford, dating from around AD1500; the little clapper bridge over a tiny tributary of the River Bovey near Jurston (I visited the orchards there recently – see the autumn issue of Dartmoor Magazine); Meldon Hill and a curious onlooker; and the old farmhouse at Lingcombe. 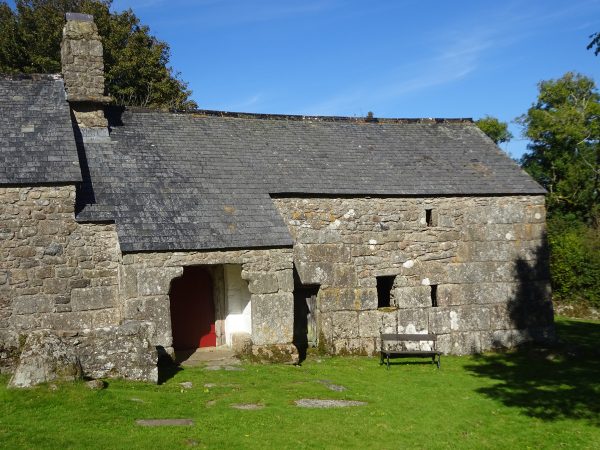 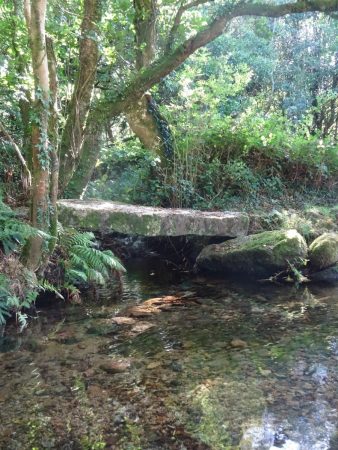 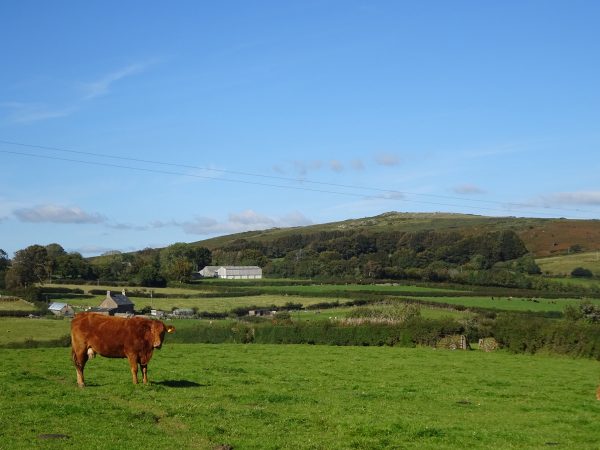 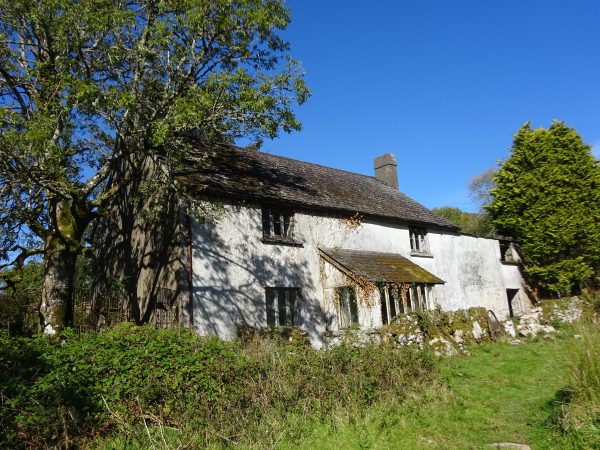 At Hurston there’s a nice Mariners Way sign (the route is signed along a stretch in this northeast corner of Dartmoor, but nowhere else). Here the Mariners Way/Two Moors Way heads NNW towards Shapley, but we headed southwest towards the edge of Chagford Common. 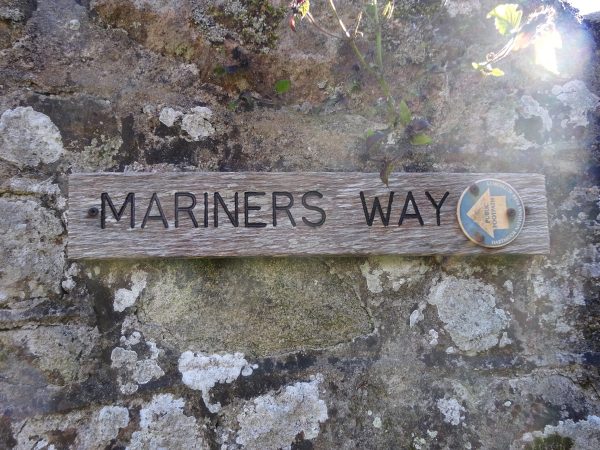 There appeared to be no way ahead across slopes of dense low-growing gorse, and we didn’t really want to head up to the main route of the Two Moors Way which runs along the ridge, but close scrutiny of the map revealed a narrow drift lane (?) threading northeastwards through the enclosed land at Lakeland. We dropped into the valley of the Bovey tributary and waded across the stream to reach it. On the other side I noticed a rather nice run of granite outcrops, the northern end crowned with a group of rather splendid conifers.

And this is where the penny dropped! Back in spring 2015 Tim Jenkinson wrote about Hurston Castle in his ‘Dartmoor Discovered’ series in the magazine. In that article he describes how to reach the tor from the parking area at Bennett’s Cross. I’ve always wanted to there myself, and was delighted to have managed it by mistake! Here’s what Tim has to say:

The name of the tor in Bovey Country at SX 683834 first appears in Crossing’s Guide to Dartmoor in 1909, but is better known from the 1912 edition reprinted for a new generation in 1993 by Peninsula Press. That said the reference is brief and is included in just two excursions on pages 248 and 475 where in the first the author simply describes a ‘ridge of rock’ on the eastern bank of the river ‘known as Hurston Castle’, and in the second that ‘Castle Hill’ lies above. From both descriptions it would have been difficult to locate the rocks. It is not until 1983, some seventy years later, that we learn a little more about the area with the help of Eric Hemery in High Dartmoor who on page 708 describes the Castle as a ‘beautiful tor’ explaining that ‘its foundation and “walls” rise, castle like, precipitously from the steep falls of the river to its summit’. Whilst this is an altogether much fuller account one still has to follow Hemery’s lines very closely to work out exactly where the ‘Castle’ is positioned because – as is the case with the many lesser-known aspects of the moor – it is not shown either by name or contour on modern Ordnance Survey (OS) Maps.

Indeed it is not until the publication of Mike Brown’s Gazetteer of Dartmoor Names in 1996 that a National Grid Reference (NGR) is forthcoming, helping to pinpoint the location. I first visited the area in May 1998 and was impressed by the delightfully secluded group of rocks that are set on either side of the river. In recent months I was reminded of the Castle by fellow Dartmoor enthusiast Stephen Jenkins who quite rightly describes it as a lesser-known tor, so in keeping with my interest in such rock piles I decided to revisit the area in April 2014 and remind myself once more of its beauty and solitude. I was not disappointed.

My photo doesn’t really do the tor justice – I should have clambered around for a better view – but it’s a really delightful spot. 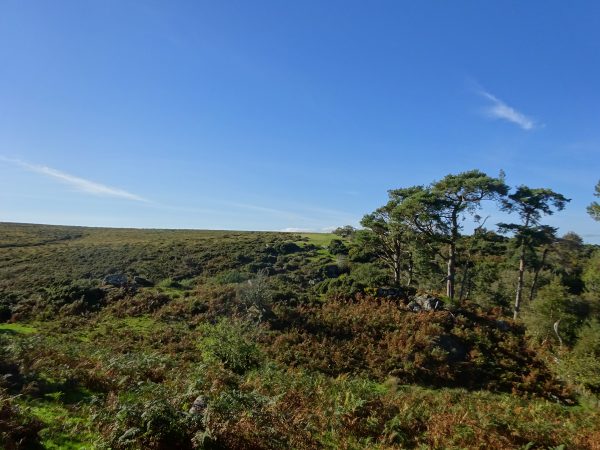 We continued on, eventually reaching the lane that runs along the west side of steep-sided Green Combe. The views over the valley we’d been exploring were stunning (the header photo was taken on this stretch too). 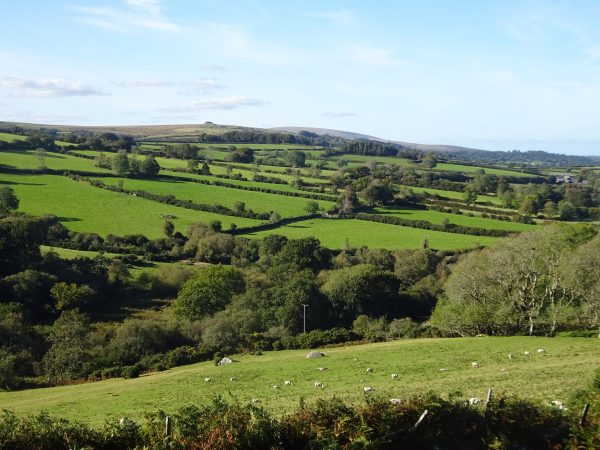 So, how to negotiate Green Combe and get back to the car? The less said about our route the better, but suffice to say it involved a fair amount of slipping and sliding and thrashing around in shoulder-high (for me) bracken, coupled with some boggy ground and a stream crossing… but we made it! 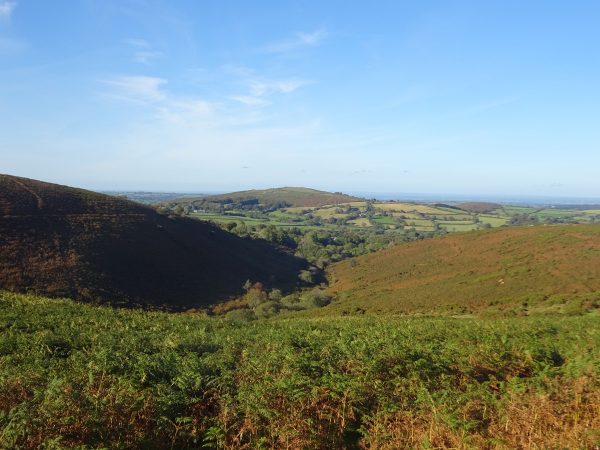