I’ve been making the most of the ‘exercise only from home’ advice over the last few weeks and have thoroughly enjoyed working out some local circular routes, so for this blog I thought I’d share three of them with you. No in-depth historical or geological insights, but a simple look at the beauty of the surrounding landscape in what has been a spectacular spring season. Each visits a different tor: Blackingstone Rock (and Heltor) which sit on the ridge between the Wray valley (where I live) and the Teign valley; Hunter’s Tor above Lustleigh Cleave; and (a little further afield, admittedly) Easdon Tor (the trig point on the summit is seen in the header photo). Now that the ‘lockdown’ rules have been relaxed somewhat I’m still not planning on going too far from home, and not in the car unless it’s a work walk: it wouldn’t feel right just yet (and I know I am incredibly lucky to have so much superb landscape on my doorstep). Being able to watch the changing colours and textures of the landscape at close hand – and with the time to do so – has been a real privilege this year.

First up we’ll take a trip to Blackingstone Rock, which I can either access via steep Pepperdon Lane (glorious at this time of year with the beech trees in early leaf) or through the wonderful oak-and-bluebell woods above Steward Wood (there’s a footpath from Budleigh Farm). From the fields above the wood there are marvellous views down the valley towards Haytor Rocks. 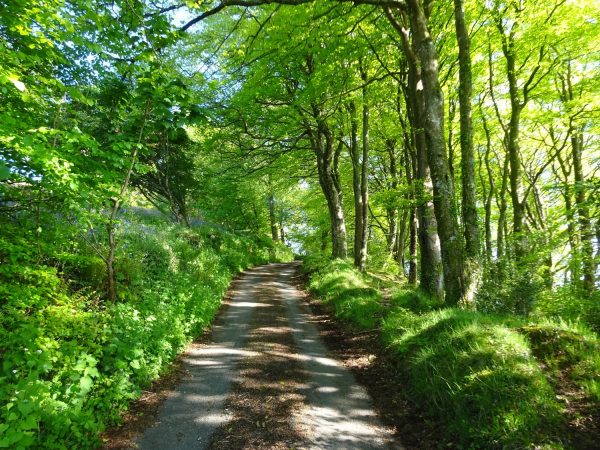 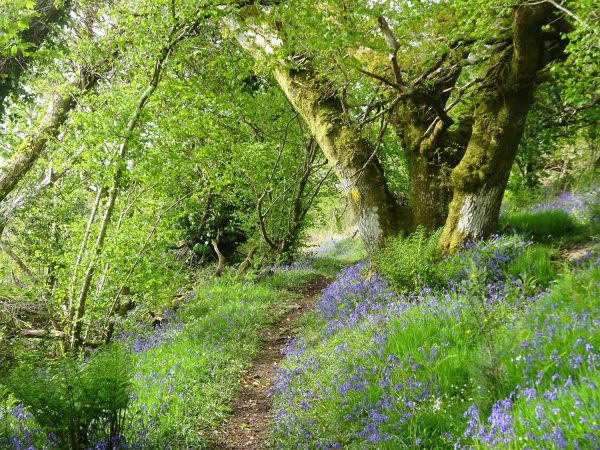 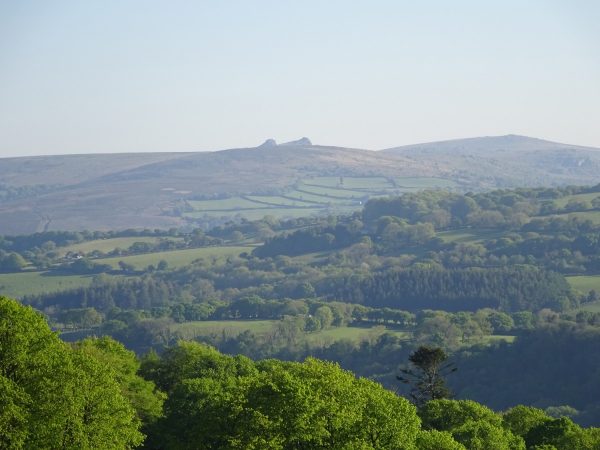 This year I’ve kept a close eye on the bluebells at Blackingstone Rock, which have been spectacular. From there my walk heads along the lane towards Bridford, and Heltor. 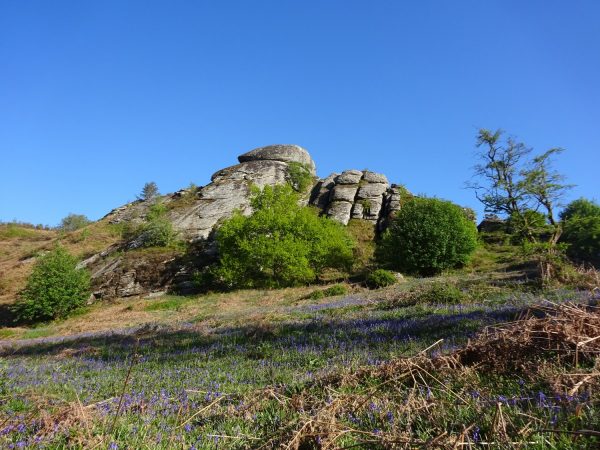 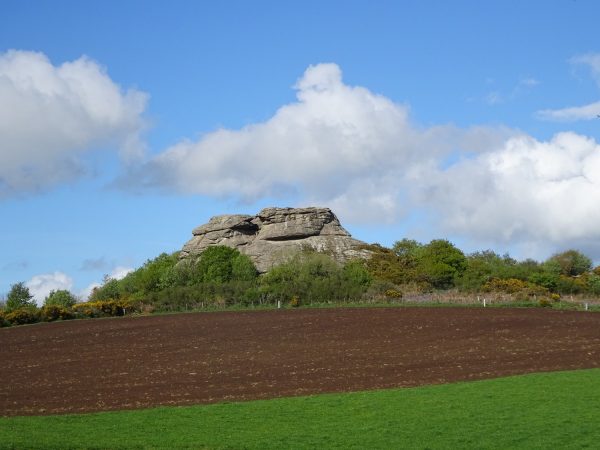 I am grateful to one of our subscribers, Ian Drawbridge, who recently drew my attention to the story behind the formation of these two tors (as described in John Hayward’s Dartmoor 365 book). It is, of course, all down to the work of the Devil, who in this example was involved in a battle with King Arthur (!). Each stood on his respective hill (Arthur on Heltor and the Devil on Blackingstone) and lobbed boulders at each other, but neither could defeat the other so in the end the battle was abandoned… their final shots remaining to this day for all to see! My walk then heads downhill via Westcott to cross the B3212, from where there’s a long climb up through more bluebell meadows eventually to emerge onto Mardon Down above Moretonhampstead. There’s a great view of Blackingstone Rock from that direction too. 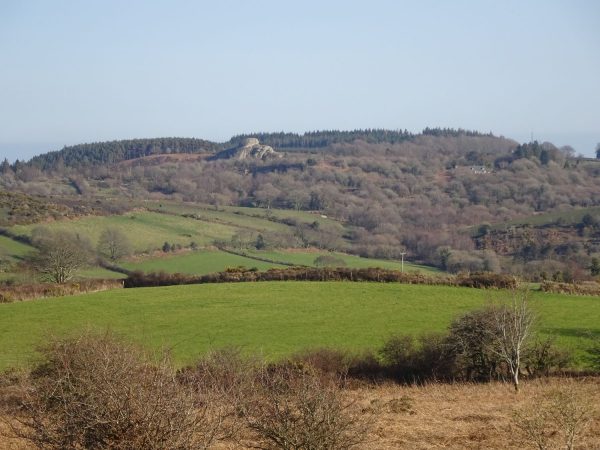 Circuit 2 heads down the Wray valley, then up the little lane opposite Wray Barton (the wildflowers are probably at their best at the moment). Next I tend to head past Sanduck, where there’s an impressive old ash house just to the side of the lane. 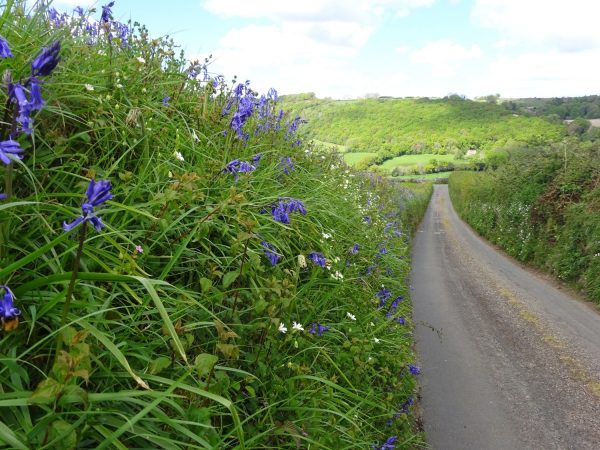 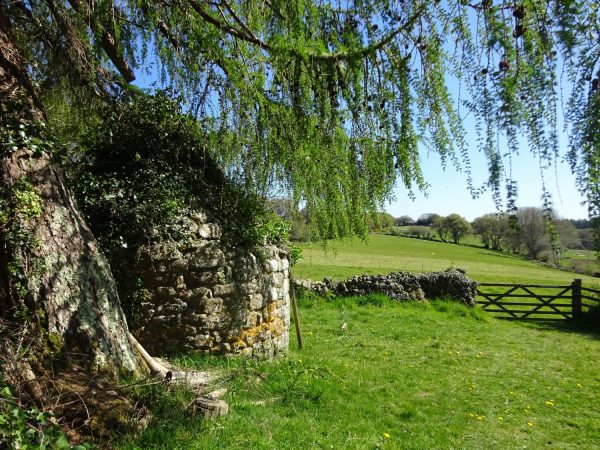 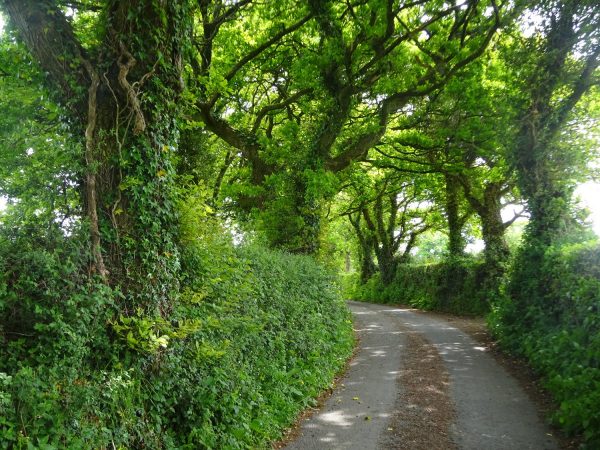 I drop through Sanduck Woods and downvalley to the top end of Lustleigh, before climbing up to the hamlet of Hammerslake (I love these steps and ‘stile’!) then it’s up onto the Hunter’s Tor ridge and home via Peck Farm. 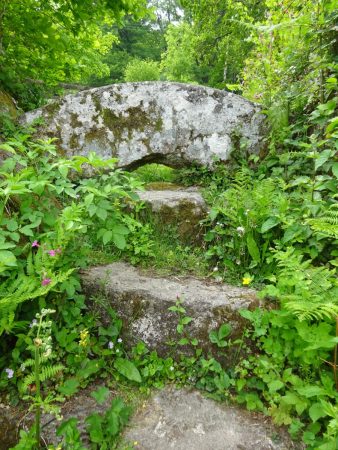 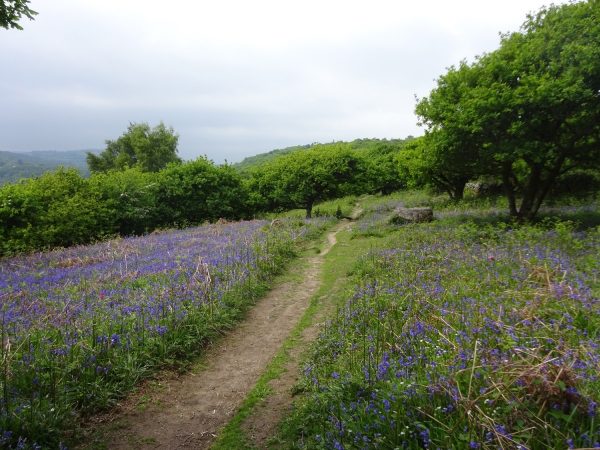 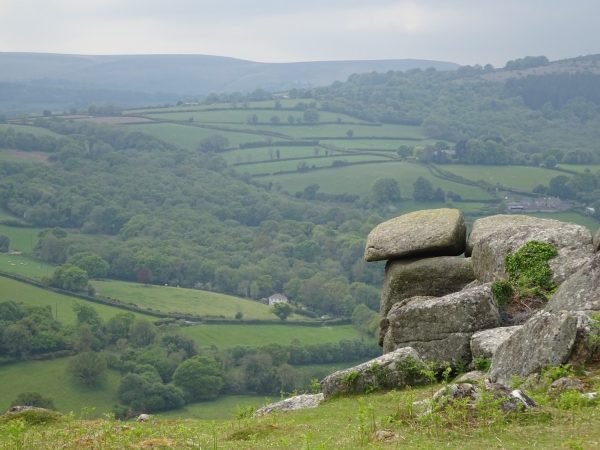 Two weekends ago I did venture a little further afield, accompanied by my son (he lives at home at the moment), and we went to Easdon Tor. It’s a while since I’ve been there and I was overwhelmed by the beauty of the views from the top. From home we walk across the fields to North Bovey, then past the gnarled old tree at Yarde, then access the tor at its northwest corner. The photo below shows the view towards Cosdon Beacon. 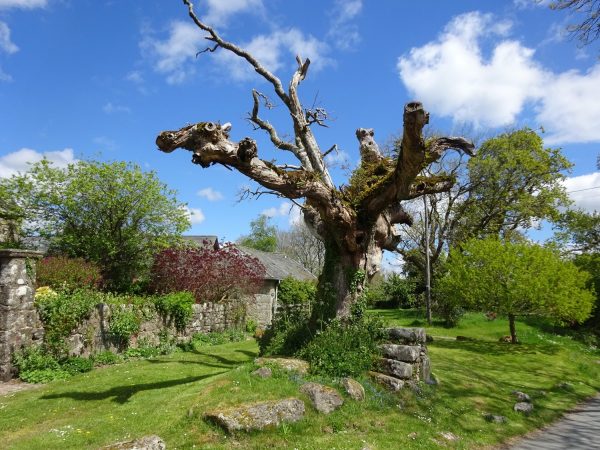 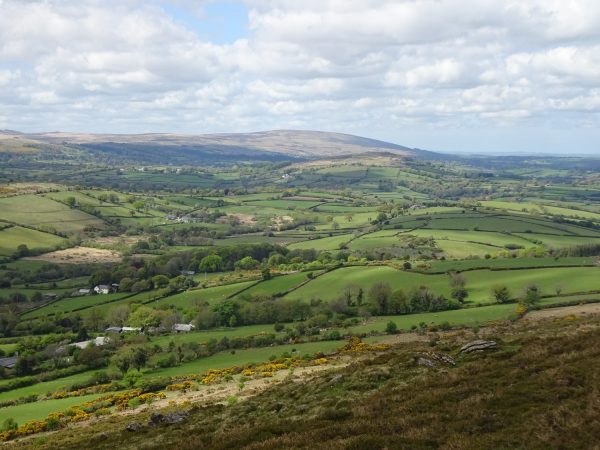 It’s been another beautiful day and I’ve been glued to the computer… time to get out. I hope that you are keeping well!

PS Deborah Martin, who writes the long walk for each issue of the magazine, has sent me a lovely piece about watching the spring unfold in Hembury Woods; and Kari McGowan (Arts & Music) has sent me some words about her springtime activities, along with a selection of her beautiful artwork. Both will appear in this blog in the near future.

PPS With regard to the ‘opening up’ of the moor you might be interested in the following: ‘Dartmoor National Park Authority Chief Executive Dr Kevin Bishop has written an open letter of thanks and asks people living in areas surrounding Dartmoor, who are already planning a visit, to observe a few simple rules.’ 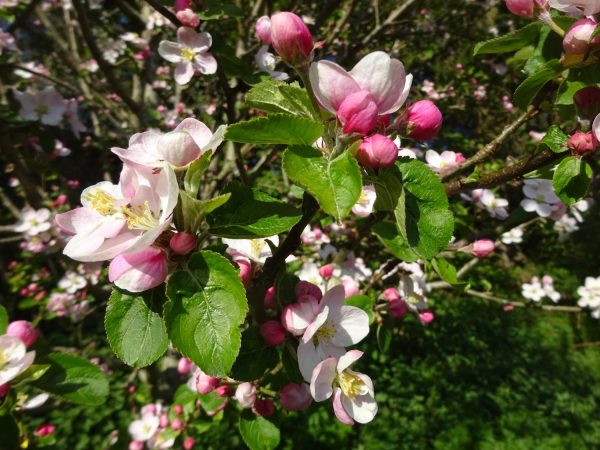