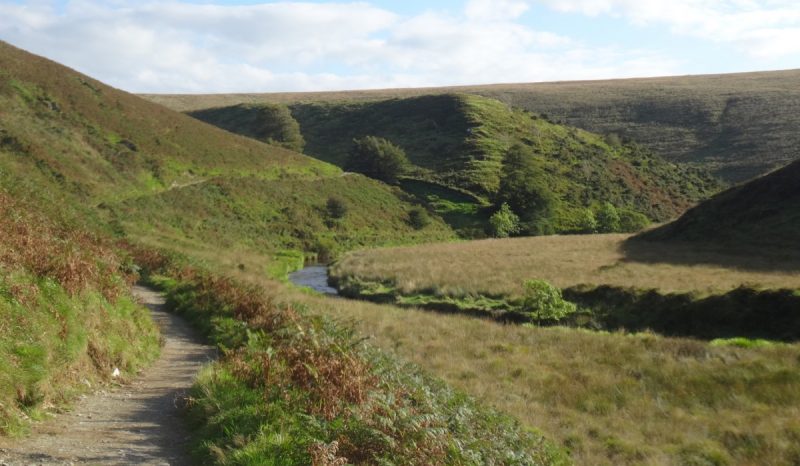 On a beautiful sunny day last week representatives from Exmoor and Dartmoor National Parks, Devon County Council, the Two Moors Way Association, the press and invited guests gathered at Simonsbath House Hotel on Exmoor to mark the 40th anniversary of the Two Moors Way, inaugurated on 29 May 1976 and linking Ivybridge on Dartmoor with Lynmouth on the north Exmoor coast, a distance of 102 miles. In 2005 a further 15 miles was added to the southern end to the coast at Wembury, giving a Devon coast to coast route of around 117 miles. 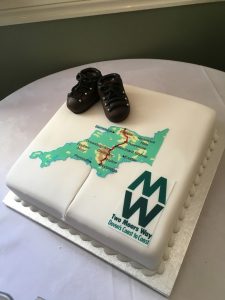 The celebratory cake (sadly the extension to Wembury on the south coast got left out!)

Over the last 18 months the Two Moors Way Association has been revived and has worked in partnership with both National Parks and Devon CC to reinvigorate the route. There have been path improvements, a new pocket guide, and a new website with accommodation listing has been launched (parts still under development). It should now be much easier for anyone wanting to tackle the whole walk to get all the information they need regarding how to do it (in one go? in sections? can my luggage be carried? where can I stay? what about public transport?) and so on. There are plans for business engagement workshops along the route in 2017 to encourage local businesses to ‘come on board’ too. 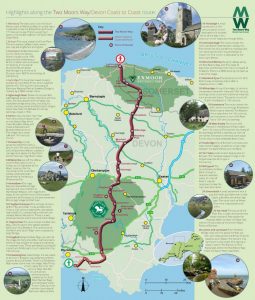 Presentations were given by John Howell (chair Two Moors Way Association) on the history of the route, Sue Viccars (TMWA and author of the Cicerone guidebook to the route, who gave an illustrated whistle-stop tour across Devon) and Dan James, Sustainable Economy Manager for Exmoor National Park. Afterwards all enjoyed a delicious cream tea and slice of cake, which was cut by the two National Park chairs: Andrea Davis (Exmoor) and Bill Hitchins) Dartmoor (photo courtesy Steve Guscott). 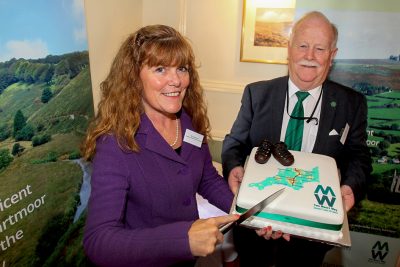 A number of guests then accompanied Dan Barnett, Access & Recreation Manager ENPA, on a short walk along an improved section of the TMW along the beautiful Barle Valley to remains of Wheal Eliza, a mid-19th century copper mine. 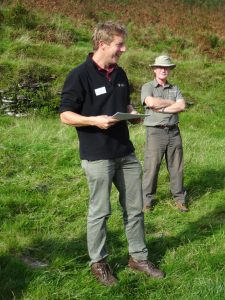 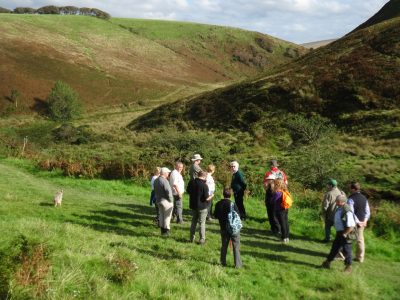 The return to Simonsbath along the Barle Valley is one of the loveliest stretches on the whole coast-to-coast walk. 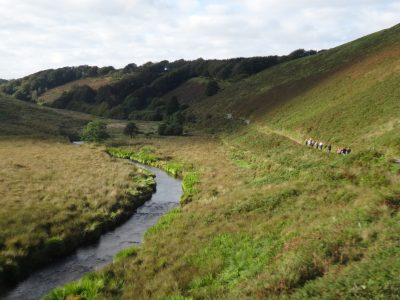 There is still work to be done: a video is being made for the website, a newsletter is proposed, there are plans to revive the stamp and passport system which used to exist at certain places along the route, and produce a certificate for ‘completers’. For more information visit www.twomoorsway.org (still under development).

The photo below shows Bill Hitchins and Andrea Davis and the walkers on the Two Moors Way on the edge of Birchcleave Wood, Simonsbath (photo Steve Guscott). 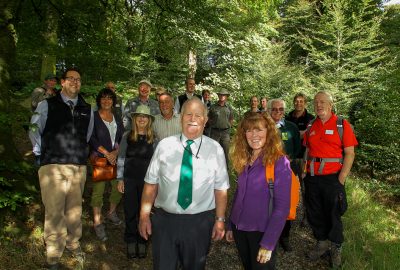