I have to confess to a spot of ‘over-Dartmoor-ed-ness’: Becci and I have just finalised the winter issue for print. Usually we get together to carry out final tweaks over the computer, but  that hasn’t been possible this time so we’ve been pinging PDFs back and forth between Moretonhampstead and North Tawton. I’m happy to say that I’ve just signed the pages off for print (always a scary moment!).

I always tend to feel a bit ‘over done’ at this stage, and in need of a break. Having a few ‘away days’ in the midst of it all to a different part of the southwest, and experiencing different landscapes, is always a good thing. So this blog post isn’t about Dartmoor but instead about recent visits to Exmoor and the Quantocks, two beautiful landscape areas in which I am lucky enough to be able to work on a regular basis.

I’ve written the walk for Exmoor Magazine for about thirteen years: four walks a year over a wide geographical area (Hartland in the west to the River Parrett in the east, and all the way south to Tiverton). The editor and I work out where I need to walk for each issue a year in advance, and for autumn 2021 she asked for something based on the annual Exmoor Perambulation walk (following the 31-mile boundary of the ancient Royal Forest, which dated from Norman times until the early nineteenth century). Unlike the 52-mile Dartmoor Forest boundary much of Exmoor’s is marked by a bank, and a large part crosses private land (a good chunk of the southern part is also now followed by roads). I walked the northern half (19 miles) a few years ago, so thought I’d base my Exmoor Magazine walk on part of that section (across the Chains, some of Exmoor’s highest ground). 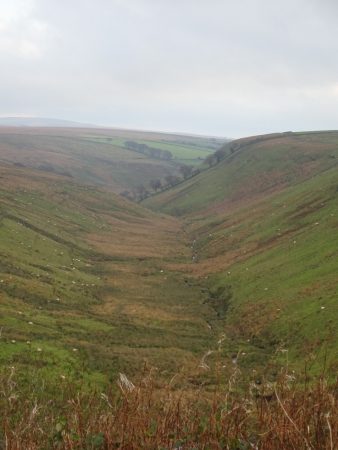 It all started well. We parked at Prayway Head – the photo above shows the infant River Exe nearby – and crossed Dure Down on the route of the Two Moors Way to Exe Head. There we left the TMW and headed west along the Chains path (below) to pass Pinkery Pond. By 1820 the majority of the Royal Forest had been purchased by John Knight, a Worcestershire industrialist who embarked on an ambitious land reclamation project (it’s a fascinating story). His son Frederic continued his work, initiating various mining projects and other schemes. Pinkery Pond – dug out by hand by 200 Irish navvies around 1830 (though I think it’s fair to say that the reasons for this endeavour remain unclear!) – is part of John Knight’s legacy. 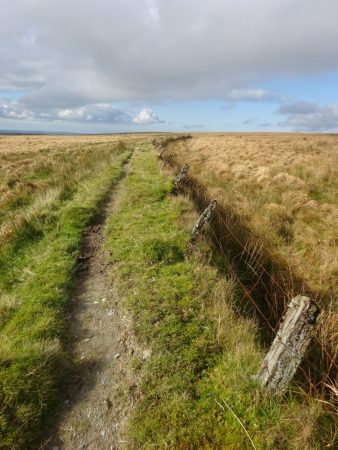 From Woodbarrow Gate we headed north across boggy ground (it’s a bridlepath, but not obvious) then dropped down to reach Saddle Gate, where we found our first boundary ‘marker’: the Saddle Stone, one of the original Devon–Somerset boundary stones. From there we headed east along what I remember as being the route of the Perambulation, across pathless, difficult and increasingly wet ground. When you’re writing a walk for publication there’s only so much you can expect your readers to put up with, and I pretty soon admitted defeat! We turned round and headed back to the car (9 miles in all) with little to show for our efforts (but having had a wonderful day out). 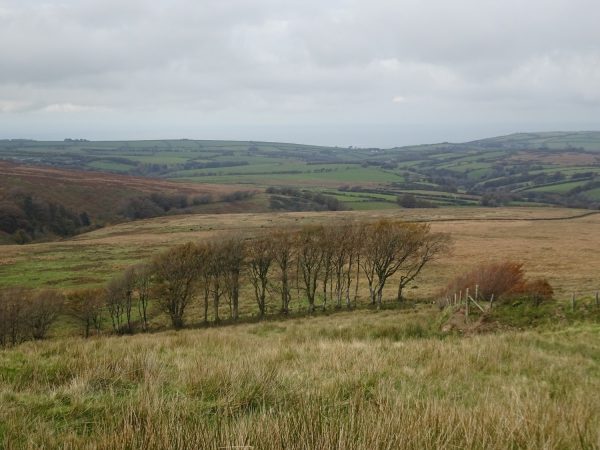 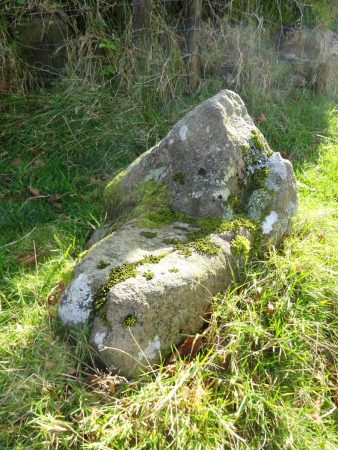 A week later saw me back on Exmoor, this time heading for Withypool on the River Barle.

Scrutiny of various maps and books had confirmed that there was what appeared to be a followable stretch of boundary bank that could be taken in on a decent circular route from Withypool. (When I say ‘followable’ in this sense I mean that the boundary here edges open access land, so there was a chance that it might be walkable – but just because something is ‘open access’ doesn’t guarantee that it’s ‘accessible’). To cut a long story short it worked a treat. I followed the River Barle upstream to pass above medieval five-arched Landacre Bridge (header photo), site of the twice-yearly Forest Court (another ‘tick’ for my Perambulation-themed walk!). 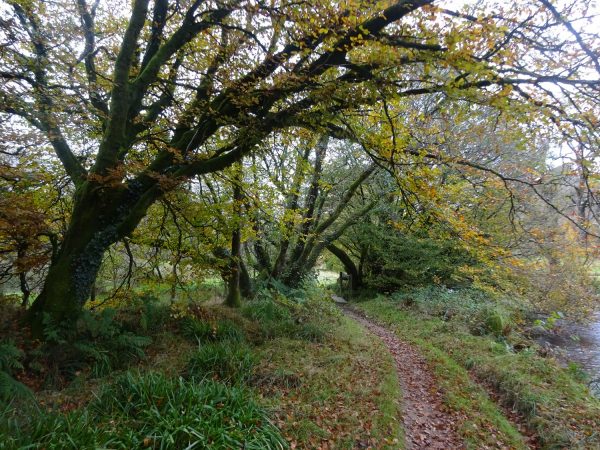 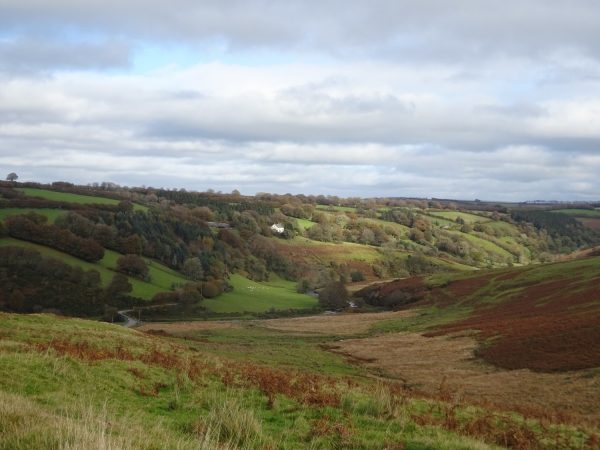 I headed uphill to Landacre Gate, then picked up the Forest boundary across Withypool Common. My return took me up and over Withypool Hill – with fabulous views – topped with a Bronze Age burial mound. I finished the day content that I had another great 7-mile walk in the bag.

Just before Lockdown 02 I managed to get in another walk for Exmoor Magazine, this time from Nether Stowey in the Quantocks. This one will appear in the spring 2021 issue – I originally walked it earlier this year but needed to double check the route. I wanted to do a walk that took in part of the Coleridge Way, which runs for 51 miles from Nether Stowey  – where the poet Samuel Taylor Coleridge lived for three years at the end of the eighteenth century – right across the Quantocks, Brendons and Exmoor to finish at Lynmouth. It’s a fabulous area for walking, as you can see from the photos below: a wonderful mix of beech-and-oak-lined paths, quiet lanes, far-reaching views (yes – that is Hinkley Point!) and peaceful hamlets. My 7-mile route involved a long climb from Nether Stowey past the remnants of the 11th-century motte-and-bailey castle to the highest point on the route, the Iron Age hillfort at Dowsborough, from where the third photo below was taken. When writing walks for any book or magazine it’s always good to have a theme, and this particular route has lots to choose from – as well as being stunningly beautiful. 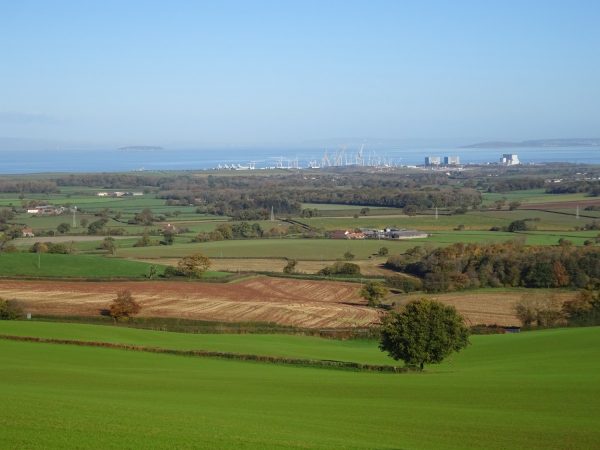 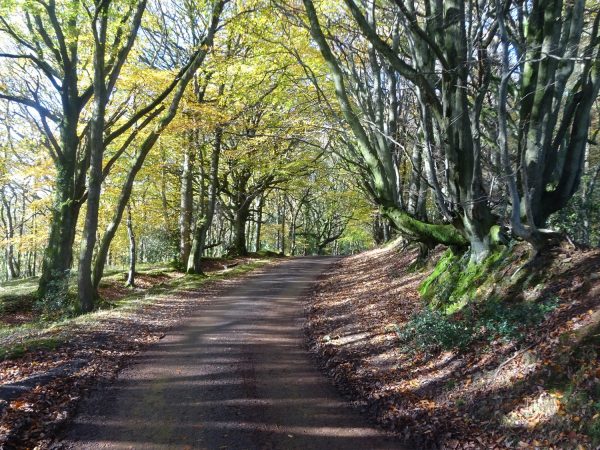 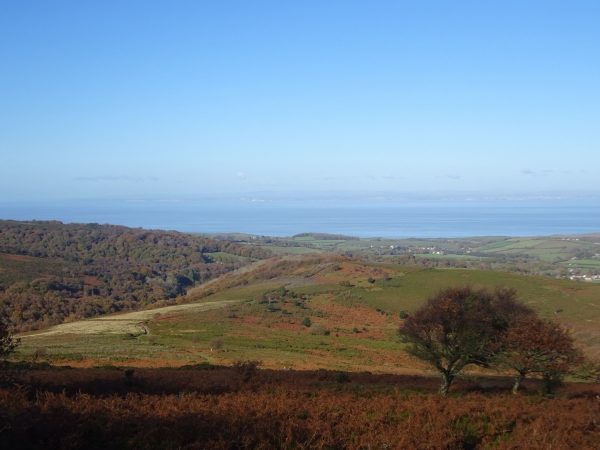 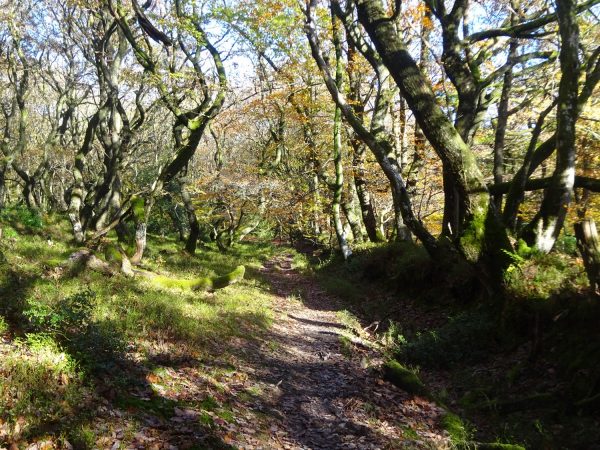 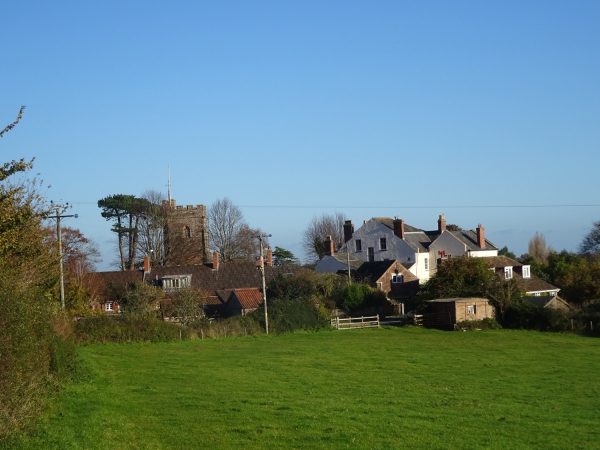 I finished the walk at Nether Stowey’s nineteenth-century clock tower feeling satisfied that everything had fallen into place. I’ve just accepted a commission for a new Somerset walks book too, and will definitely be working out something in the Nether Stowey area for inclusion in that – it’s very nice when various aspects of my work cross over (for example I don’t need to worry about taking any more photos for the new book). 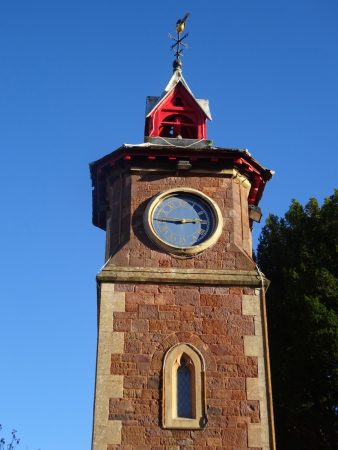 And so back to Dartmoor and Lockdown 02… ah well!